HMS London returning home at the end of 1945

I had a busy weekend with various things but have managed to put a shift in with the 1:4800th WW2 ships and other parts of my North Atlantic project. The ships are all based and undercoated (not the destroyers as yet as these will follow once the larger stuff has been completed) so the real work can now commence. My new painting station - by the patio doors in the lounge - is an ideal location for daylight so I am actually enjoying the process for a change (my aversion to painting being well known). Setting up the area is quick and easy as the table folds away in seconds and everything I need is in the sideboard about 3ft away.

I have settled on another shade of blue for the ship bases as my previous and long serving Humbrol Matt 25 is a little on the dark side for these diminutive models. Whilst we were out on Sunday for some shopping I had a quick look around in Hobbycraft and found a good medium blue/grey enamel - Matt 89 Middle Blue as I recall - that is a pretty close match for the main shade of the Axis and Allies: War at Sea maps.

Now I know this is a little on the sky blue side but the plan is to wash this with blue/green ink before adding the waves and wakes. The ship name label and national ensign will also help to reduce the 'blueness'. I am not a fan of mixing colours and I must confess to preferring my sea to look blue rather than grey or green.

I dug out the aforementioned maps to reacquaint myself with them and will be fine for what I am planning and best of all the squares are 3 1/2” across the flats. This means that the largest ship base of 7cm will fit in with no overhang. I was also able to locate the printed copy of Axis and Allies: War at Sea using miniatures with  all the ship and aircraft stats in tabular form. I no longer have the ships or cards that came with the original game but this little lot will more than do the job - all I need to do is draw up some fleet lists with the stats. The rules and the stats are now safely in a folder for me to read whilst on my daily commute.

The classic profile of a County Class Cruiser

Something I did with the models over the weekend that I am rather pleased with is convert a Royal Navy County Class cruiser into one of the quite different looking sub classes. I needed a model of HMS London but MY Miniatures do not make one. I read somewhere that she was refitted using  a similar superstructure layout to a Colony class cruiser so as I had one of these spare, plus a slightly miscast County class I was able marry the two together to give a reason approximation of the type. the main differences were that the London had a much lighter rear superstructure and only two funnels - the forward of which was partially encased in the forward superstructure. 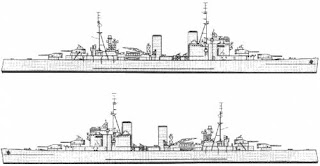 It was quite straightforward to do albeit a little time-consuming and fiddly. The worst part was filing odd pieces of superstructure to size but I got there in the end. Whilst it will not win any prizes for super-detailing the end result will definitely pass muster. The model is currently undercoated with its near sisters awaiting its topcoat. Once I have this lot finished I will of course being posting to the blog with pictures of everything.

I really feel like I achieved something this weekend as aside from the above I was also able to sort out the 15mm WW1 Turks and Arabs. There are a couple of items I need to add to complete this but nothing too involved. For the Arabs I need some Rolls Royce Armoured Cars, some machine guns and some French artillery. I will also need to change the command groups slightly but nothing major. The Turks are good to go as they are.

All in all then, a very positive start.

I've been catching up with the progress you have been making in your various projects, and I am very impressed. Your conversion of a three-funnelled County-class cruiser model into one of HMS London sounds very interesting.

Hi Bob - and welcome back,

It was about time I started doing rather than thinking! I am pleased with the progress so far and the minor conversion came out rather well.

The models are quite basic so the conversion fits in well with the others. I am really keen to get these on the table and all the early signs are very encouraging. I want to have them finished by the end of the year so that Q1 2019 will be devoted to Spencer Smith ACWs.

Sound progress on this project, David.

London is a bit of an odd duck after her refit; I am looking forward to a pic or two.

It was a good weekend for sure and I managed to get a lot of things sorted which is always progress. I would never have thought about converting 1:4800th scale ships but, sore fingers aside, it has worked out OK within the context of the detail level of the models.

There will be pictures once they the models are painted and then I will be looking to get some games in.

You have progessed really well over the weekend. Interesting projects.
Alan.

With me the challenge is always maintaining the momentum! Having said that the plan is to have the ships finished by the end of the year so that the decks will be clear for the Spencer Smith ACW project.

I am fully expecting this to be derailed at some point!