Napoleonic Battles in the Grand Manner 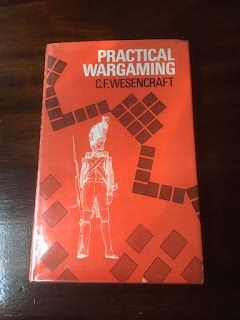 It never ceases to amaze me when the metaphorical wheel completes a revolution and comes back to where it started. The case in point is my long association with the Napoleonic Wars. I say long association deliberately because it was the period I cut my wargaming teeth on back in the early 1970s. I have mentioned previously my long gone but not forgotten Airfix British Army for 1815, my 1812 Russian Army and the 15mm 1815 set up I owned specifically for use with a set of rules called Le Petit Empereur. I have also mentioned my flirtation with Command and Colours Napoleonics and even a 54mm lawn based H.G. Wells style refight of the Battle of Leipzig, not to mention the naval side of the wars.

In short the Napoleonic Wars have given me much, if intermittent, pleasure over the years and so, for a variety of reasons, I now find myself staring down the barrel of dabbling in the period once again, albeit in different way from previously.

I am looking long and hard at army level actions - in effect fighting big battle/operational campaigns. This is a piece of pure indulgence for me as this is the type of game I wanted to fight years ago – in fact I messed around using Lego bricks as the units which will probably give you an idea about the vintage of this particular idea! Nowadays of course I use blocks of a rather different type. Having said that Lego is a great source for making simple 1:300th scale buildings, at least the earlier ‘non model specific’ sets were and whilst I do not have any to hand I will build a few so you can see what I mean.

Whilst looking at this as an idea the first thing that crossed my mind was the inevitable question about rules. This style of action represents quite a step up in scale from my recent games and so a different approach will be needed.

There are a few sets of rules pitched at this level - for example Blucher by Sam Mustafa or something like Volley and Bayonet, both of which have much to commend them. At this stage though I have something else in mind.

Way back in 1974 Charles Wesencraft published the book you see above. I recently acquired a copy of this and was really pleased to do so as I remember reading it 'back in the day' and being hugely impressed with it. The author's ideas seemed pretty advanced at the time although there was one set of rules contained therein that really caught my imagination and indeed, have stayed with me, waiting in the wings, until I was at the same level as the concept. I am of course referring to his 'Army Corps in Action' rules contained in chapter 11 of the book.

These rules use the following scales:

I seem to recall an article by Charles Wesencraft in - and I stand to be corrected - a Battle Christmas special where he looked to fight battles where a single figure represented a battalion so in effect a typical base of three or four figures would represent a brigade. By extension a couple of normal infantry units of around 18 figures each would furnish in effect a Corps.

As an aside if any readers have a copy of this (or whatever magazine it was published in!) magazine I would really appreciate a scan of the article.

Now I am going to throw in my two pence worth and say that a rule set on this basis would be better served by using either very small figures - 2/3/6mm - or, dare I say it, BLOCKS!

Old school I know but it is something I want to tick off the wargames bucket list. Assuming it works out I would even look to taking the rules into other directions as I reckon there is a degree of mileage in them.

Surely sir 'tis the way of madness
Oh, go on then

Quite possibly but this is an itch I had forgotten I had....

Paddy Griffith had some interesting ideas for army level games in Napoleonic Wargaming for Fun (1980). Might be worth checking out his approach as presented there.

This is truly going back to your roots. Interested in hearing your impressions in the future

I had forgotten about Paddy Griffith so many thanks for the prompt! Several house moves ago I am sure I owned a copy but not any longer so a quick trip to John Curry or EBay may be in order.

In many ways you are quite right but I am doing so with the benefit of a lot more years of experience than way back then! I like the core concepts that Charles Wesencraft came up with although being an inveterate rules tinkerer I have a few ideas to shake things up a little.

I am very much looking forward to trying this though.

I spent some time today typing out the rules so that I could, ahem, experiment with them (it is also a good way to get them in mind) and there a few things I would look to change but by and large they look the part.

In many ways they were ahead of their time and I would be interested to hear what Charles Wesencraft would think of them nowadays.

I have a copy of this original version in my library also - great read!

I was considering it recently for my latest delve into madness... the Crimean War!

I have always said you a man of impeccable taste! Delve into madness? There was me thinking we were already there!

All the best and please extend my congratulations to 'Right Stuff'

We have been for many years methinks :-)

Hi David, after some rootling in the loft I can confirm I have a copy of 'Battle for Wargamers Wargames Annual' from 1983 ( 'A Military Modelling Magazine Extra') compiled by Stuart Asquith, with the article 'Who Wants to be Napoleon' by Charles Wesencraft. Indeed one figure per battalion, and stands representing regiments/brigades, mounted so as to show different formations. Not a full set of rules, but will get your mind whirring.. I can happily scan and send, if we can privately swap emails. Merry Xmas!