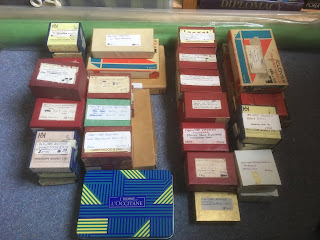 The above is the Minifigs component of Eric's Seven Years War collection. There are some 48 units boxes covering France, Britain, Russia, Austria and Umbriago (one of Eric's imagi-nations based on the Italian States). In terms of figures themselves there are over 120 mounted and 500 foot....And that is just the Minifigs....

Busy week this week with lots going on. To begin with I drew up one of the two lists requested in respect of Eric's collection - this being for the Minifigs component of his Seven Years War set up. The second, that of the 1670 to 1720 cavalry, will take a little longer to do so apologies to those that are waiting on the same. I have to say that although listing the contents of each box (and winnowing out some odds and ends), although taking best part of Sunday, was both incredibly therapeutic and very interesting. the one bog advantage I have with the Minifigs portion is that at least the infantry are easy enough to identify as they have the ID code stamped on the top of the base rather than on the underside. Given that Eric had filed the underside of ALL the figures before organising them into units this was rather handy! 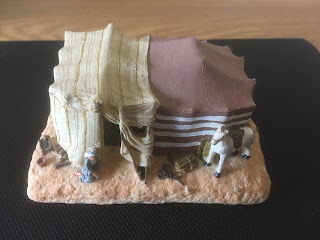 A rather useful acquisition scaled at around 15mm. This is a genuine Arabian souvenir and will serve quite readily for my 15mm Arab Revolt set up. It is roughly 75mm by 50mm and has a label on the underside that announces that the model was produced by the Bedu Centre - in both English and Arabic.

Aside from the changing of the clocks and the looming spectre of Salute, the beginning of spring also heralds the start of the boot sale season. At present out usual event is not open - it is still a couple of weeks off - so instead Laurel, Holly and I went to the local boot sale just up the road. This is very small by comparison and can be easily looked around in less than an hour. I managed to pick up the above Bedouin tent for the princely sum of 50p.

I have a couple of other things to report but these will be best served by dedicated posts so that will be the next two taken care of!
Posted by David Crook at 16:54

That is quite a large number of figures! It would keep most wargamers happy painting for years!

I love the Bedouin tent! It would be great as a centrepiece or objective in a wargame set somewhere in Arabia.

There is certainly the potential for a complete set up within this portion of Eric’s collection - the only thing missing is artillery. This represents around a crate and half in total. The 1670 to 1720 Minifigs fill around a crate as there is slightly less.

I was rather taken with the tent and am thinking it would make a suitable dwelling for an Emir. At 50p it was too good to turn down!

Keep sorting Dave!! I know you're enjoying yourself!

It has turned in to a little bit of a guilty pleasure for sure! I will be sorting the cavalry out over the weekend and have discovered that there are a few units of Dixons infantry for your period kicking about so try not to spend too much money as Salute!