I have previously mentioned that Eric was a great fan of naval wargames and so in true Eric style he acquired an immense collection of ship models for his games. The South East Asia 1941 campaign being a good example. For this campaign we had the fleets of Russia, Japan, Italy, Austria, Turkey, the Royal Navy and eventually the Americans. There were models from all manner of sources - Eaglewall, Airfix, Superior, Viking, Mercator, Minifigs and various 'made in Hong Kong' conversions. Eric was a great one for conversions and so many ships took on the guise of something completely different from what the manufacturer intended. All the participants (yours truly included) contributed various scratch built models - I made a very passable Goeben whilst Bob Cordery, Neil Fox and Chris Hardman also turned out some really lovely models. It was all great fun in a silly kind of a way as the naval arms race got completely out of hand, mainly due to the prodigious amount of tonnage belonging the central powers being, for the most part, ignominiously sunk by Christmas 1914....

The naval portion of Eric's collection is a seam waiting to be mined in due course so I was rather surprised to find the following items lurking in a box described as 1685 Sedgemoor. 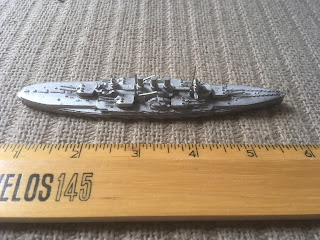 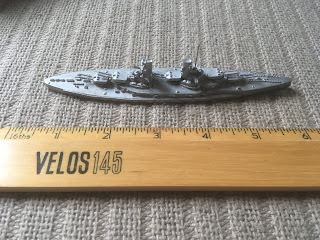 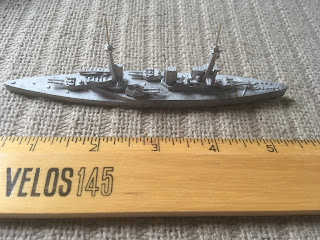 There are two of each model and after some investigation it appears that they are early Superior models, currently available from Alnavco in the US of A.These models never saw action during the campaign and are pretty good condition considering they have been in storage for something like 35 years! All the turrets are present and correct - Eric had glued these in place - and the only damage appears to be with the masts of the Helgoland class.

They are very attractive models and would certainly have been useful during the SE Asia campaign - especially for the central powers, given their losses!
Posted by David Crook at 09:00

Fine looking models. I recall playing FP on a large and empty storeroom floor. Be careful where you step!

I know what you mean! I have tried FP on the floor a couple of times and as you correctly point out - one has to watch where one walks!

FP on the floor of the Naval Reserve Gym using the full 100 foot scale. I still have my 1200 scale ships from 40 years ago. Oh to have young knees again.

Now that is the way to do it! Golf tees and surveyors measuring tapes. I know what you mean about the knees though....

Ah, Dave, those ship photos bring back fond memories. More than half a century ago my friends and I were engaged in a great naval arms race, scraping what money we could put together in order to send off to Alnavco for another ship to add to our fleets. Amazing that even 50 years later they are still in business! I collected (and still have) the Royal Navy. Others collected the Germans, Japanese, Americans, and French fleets. We may even had some Italian ships as well. I still have Dr. Oscar Park’s British Battleships book from that era, as well as March’s British Destroyers. (Was there ever a companion cruiser book?)

We used to fight our FP naval battles on the basement floors, and even had a few “night” battles that most of the ships survived un-stepped on. I have to say that of all the games I’ve played, Fletcher Pratt’s naval game was the most fun to play – setting your sights and estimating range is ever more engaging than rolling dice. Most of my ships are Superior models, but I have a number from other manufacturers and some home-built ones out of balsa wood as well, including a 1921 Battlecruiser – the full Nelson & Rodney – and the original Lion Class, thanks to Dr Park. Good fun.
Chuck

The SE Asia WW1 campaign that Eric organised in the very late 1970s featured a cast of thousands in respect of model manufacturers and scratch builds/conversions and 'never was' types. All great fun and fondly remembered.