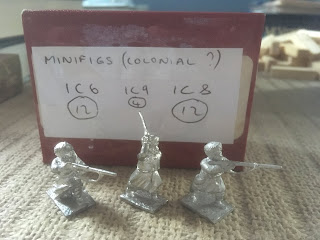 Minifigs 25mm Pathans (code IC for Indian Colonial). the chap on the right - IC08 is described as a Pathan Officer on the Caliver website which is currently being investigated by Mr Ryan. They are rather nice figures and so i have asked to see if there are any pictures of IC 7 - Pathan Advancing. The numbers in circles refer to the amount of figures in each pose. 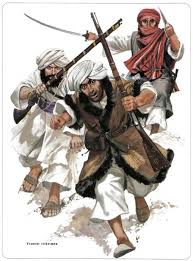 Following Bill's arrival earlier in the week I have managed to sort out the remaining figures from Eric’s unpainted lead mountain and so now have a much clearer of what I am dealing with. I have mentioned previously that Eric had a fairly relaxed approach to mixing manufacturers within not only the same army but even at unit level. A typical example would be an infantry unit with Dixon rank and file, Foundry command and Minifigs grenadiers. The first order of business then, was to take out those figures that are ‘out of step’ in respect of compatibility - essentially the Minifigs, Hinton Hunt, Higgins and older Hinchliffe types.

By doing this, or rather by starting the process, I have managed to sort out fully the 1680 to 1700 ranges for the British, French and Irish armies. There are more figures that would drop into this period contained in the other armies but this will suffice for the time being. In practical terms this equates to around two full crates of figures. Taking into consideration these other armies I reckon there is probably another couple of crates of figures which I shall sort out next before moving on to the Marlburian period.

A number of interesting things have arisen from going through all these figures and one of these is that Eric was very fond of his artillery! The number of gunners for everything from siege artillery down to battalion guns and all points of the gunnery compass in between is prodigious. He was also very fond of engineers, sappers and miners and so there is also a good selection of figures for these arms of service. There is also a significant number of Command figures - Eric made substantial use of the Wargames Foundry Marlburian range for this - that goes way beyond the merely functional and typical ‘officer, standard bearer and drummer’ we often see. Substantial numbers of mounted commanders, multiple standard bearers, sergeants, drummers, fifers and officers are the norm and Eric certainly never skimped on this aspect of his armies.

Potentially there will be the situation whereby a number of figures are left hat will defy all efforts to be sold - either to known interested parties or via EBay or similar. A chance conversation threw up the question of the ultimate fate of old figures of being melted down, in effect, scrapped. Even this is not an option considered lightly as the older figures have a far higher lead content - presumably ideal for the home casting brigade - so apparently there are only a few figure manufacturers that would consider them. In any event the financial recompense would be minimal.

The Minifigs component of Eric’s collection is throwing up a lot of usable material when taken as a whole, rather less so on an individual army basis. My plans for how best to use the models are many and varied but I will reserve my final decisions until I have them properly sorted. Given the diversity of types my thoughts have been very much imagi-nations focused as this would be the most effective way of making use of the variety therein. There is a historical precedent of sorts in that I am pretty sure that the armies of France in the first half of the 18th century were behind the curve in respect of uniforms (I am sure that Mr Fox can enlighten/correct me on that score!) so early period figures - Marlburian and late 17th century - could find a home in the Grand Duchy of Artois whilst the more modern looking, Seven Years War era types, would furnish the Electorate of Kronenbourg.

The Indian portion of Eric's collection looked very much like it was designed to fight alongside Clive although the mix of figures is somewhat eclectic even by Eric's standard! There are lot of very early early Minifigs ancient Indian spearmen and cavalry with some Renaissance types as well as some 19th century Afghans. The latter consists of Minifigs infantry and Wargames Foundry command and cavalry. I would not be in the least bit surprised if there are some boxes of Foundry infantry lurking around and awaiting discovery. 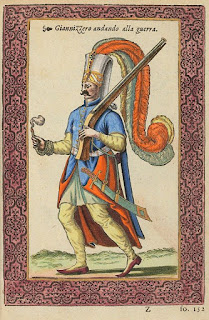 The Minifigs Jannisary figures I have look rather like this dashing fellow with a full set of plumes on his headgear.

The Turks are rather a mixed bag with most of the infantry (including the Janissaries) consisting of Dixon and Essex but with mainly Minifigs gunners. There are a couple of units of train guards consisting of Minifigs Turkish infantry armed with what looks like a Jezzail - Eric had added these so I will need to find out what the original figure was. Two boxes of Minifigs Janissaries (around 80 figures worth) and some 60 or so cavalry complete the collection.

Plenty more to do in the great sort out but having the entire collection to hand is very useful and makes life a lot easier when sorting it out. The only downside is that my man cave is rather congested for the present....

Sounds like you're having fun sorting through all the figures Dave?

I had a look on the Caliver site and think that the Minifig Ottomans !ook rather splendid!

It sounds rather daft but in many ways sorting through the collection acts as a pleasant reminder of gaming in days gone by and all the conversations I used to enjoy with Eric - he would speak I would listen - and some of the epic games we used to take part in.

It is hugely therapeutic and I am really enjoying the experience.

They do look rather good but I will need to get some pictures. I reckon I will not need too many additions to make a viable force for the Turks.

Anxious looks from the wife perhaps?

Up to a point she has long since given up on my hobby although she has not been up in the loft recently.....