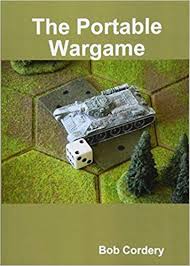 The original book in the series.... 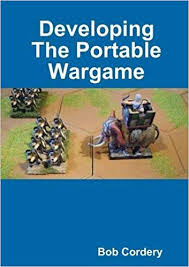 ....and taken a stage further. 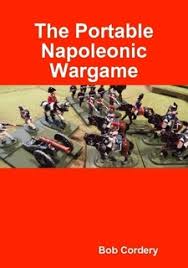 Possibly the pick of the bunch but I couldn't possibly comment....Seriously though, these rules will be forming the basis of my 18th Century project and by merely tweaking a couple of minor points will serve me admirably (note the basing convention used by Bob on the cover).

Whilst the grey matter has been absorbed with planning and organising the Minifigs portion of Eric's collection I have also taken some time to review some of the games I have posted about on the blog. For the most part the land battles used Command and Colours inspired rule variants as well as the Portable Wargame and its predecessors. In each case a grid-based playing area was used - either hexagonal (typically 13 x 9 - the same as a usual Command and Colours playing area) or squared (12 x 8). I used three sizes of hex - 4" (Hexon), 3" (Axis and Allies maps) and 45mm (Heroscape). the squares were a uniform 3" throughout. Each size (and shape) has its advantages but for me now the optimum will be 4" and squared.

One of the difficulties that arises when using a grid is that if the unit of troops is physically large then the room for any terrain is restricted. In my opinion a unit occupying a grid space should not take up more than half the area if terrain is a feature. With this in mind, and given that my wargames going forward will be largely Portable wargame based, I intend to use Bob's basing convention for my 25mm Minifigs armies. This will be 2 x 3 figure bases for an infantry unit, 2 x 2 figure bases for cavalry and a gun with two gunners for the artillery. Foot command, gunners and riflemen/skirmishers will be on a 1" square base and mounted command on a 1" x 2" base. Using this system means that when a single unit occupies a grid area there will be sufficient room to deploy any terrain that is required.

I have opted for a square grid as opposed to hexagonal simply because terrain will be easier to both build and to configure on the playing area. At this stage though I am still debating about using an offset square grid rather than the usual chessboard style. This would combine the best of both worlds in many ways but I have not made any decisions as yet.

One of the other points that arose with all this concerns army size. Based on the size of my usual playing area - 13/12 x 9/8 grid areas - a good sized game can be fought with around 8 or so units a side. On occasion I have fought actions larger than this but not by much. As a good benchmark a field force of around dozen units will cover a variety of army selections for use on the tabletop and depending n the scenario being fought. It is always a good idea to have and army slightly larger than you would routinely use so that special units can be cycled in and out of the collection as required. Using the Portable Napoleonic Wargame as a guide I am thinking that my old idea of building up an army consisting of a Charge sized infantry regiment and a cavalry regiment with a gun battery would readily translate into 8 x 6 figures infantry units, 6 x 4 figures cavalry units and two gun batteries. That translates into a full strength army of 16 units under the Portable Napoleonic Wargame which is larger than the biggest action I have fought by 4 or 5 units. I would add a further gun and crew and some rifle/skirmish infantry to the mix meaning in total the whole army would top out around 66 foot and around 28 mounted with three guns.

As I survey the inordinate quantity of unpainted metal currently occupying the man cave this figures regime seems the perfect way for me to translate the ideas I have into a gaming reality and so that will be the next step.
Posted by David Crook at 08:38

David: can I recommend, instead of 'offset squares', offset 'oblongs' in a 'stretcher bond' brick pattern? The geometric effect is closer to that of a field of hexagons, and you'll get more cells in your playing area.

The ratio of long and short sides should be 8/7 or 7/6 (better yet 7.5/6.5, but that's hard to measure!). Say, 10cm to 8.5cm, or, perhaps better, using Imperial measures, 4-inch to 3.5-inch. If you were to adopt this method, I recommend placing a dot in the geometric centre of each grid cell, which will make visualisation of firing arcs easier.

I had wondered about the ‘brick’ approach but as mentioned, I have yet to make a final decision. I used an offset square grid with the Axis and Allies War at Sea game which worked pretty well and I have seen them in use on a couple of blogs. For now though I need to get the figures sorted so I know what I need to get and then there is the small matter of painting....:-)

For the first time in a long time I am actually looking forward to this.

If anyone had said to me last year that I would looking at assembling 25mm 18th century Minifigs imagi-nations I suspect I would have laughed at them! The good thing for me though is that the plan is achievable as I have virtually everything I need for the army sizes I am now working to.

Once the figures are sorted I can see what I need to buy in (mainly artillery and mounted generals) and then we are good to go.

I have also just ordered some 2mm forces for the same period again, to give me the visual feel of a larger battle. The forces are the same bar having only 2 cavalry units and I've upped the commands, to represent Brigades and Divisional commanders.

Both games will be on show at the Cotswolds Wargames Day in early September, which gives me plenty of time to get my act together!

I have come to the conclusion that the size of army you mention is about the right size and with enough options to keep it interesting. I discussed this with Bob Cordery earlier today and his input has only served to reinforce my decision to work to this size going forward.