Looking back and going forward 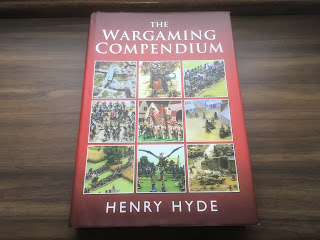 Way back in 2013 Pen and Sword published the above book by the well known wargamer, Henry Hyde. For a variety of reasons - as I recall primarily financial - I never got around to acquiring a copy. A short while ago a digital version was made available via Amazon for the paltry sum of £1.19 so I quickly snapped this up. On the back this I then tracked down a copy of the hardback version because this is really a book that any wargamer worth their salt should own.

Henry is, I believe of a similar age to myself (possibly he may or may not have the advantage in years on me) so much of what he has written strikes several chords. In many ways this book is a reflection of wargaming as I, and many others, have seen it and how it has evolved since the late 1960s. There is much that is old and indeed both acknowledges and celebrates the fact; there is also much that is contemporary and relevant for the future. In short it is as though the years 1970 to 2013 have been reset in some way and that this is almost wargames v.2 - that is how I have seen it. It is very much in the nature of 'this is where we are and how we got her and how all this can take us forward'.

There is much in the way of wargaming basics - period and army choices, scales of figures and games, practical details of painting and modelling as well as considerations of rules etc. The key for me though is that these are couched very much in present day terms. I suppose the downside is that this will date but given that most other books of this level of coverage are now forty odd years old Henry can be forgiven for this. It is relevant for now (at least for 2013 anyway!).

I will not give a detailed review of this book - this has been addressed in a far more eloquent fashion than I could - as I would be likely to lapse into a rose-tinted, staring into the middle distance with a vacant expression on my face as I wallow in a bath of nostalgic reverie.

I have absolutely no hesitation in recommending this and indeed, I am eagerly looking forward to embracing some of Henry's ideas or rather, RE-embracing them.

This really represents Henry's Magnum Opus. WC provides a good overview of the hobby and is an enjoyable read and reference.

The key thing for me with this book is that it represents a 'new school' take on what passes for 'old school'. It is as though the last forty years have been brought up to date and that this is a framework for the way forward.

For me it has pressed the reset button in a number of areas - areas that I had thought I had forgotten about!

It's a great book and in my collection too.


It is a great book indeed. Thanks for mentioning it and reminding people like me to dig it out from the bookshelves once more.

Sold to the man at the back with an iPhone and a connection to the internet!
Thanks I am now the proud owner of a Kindle version and in time probably a hard copy!
Thanks for the spot, I am lapping it up

I am really pleased to have added this to my collection - albeit rather later than when it came out!

This book really struck several chords with me and I am only sorry I left it so long before I got a copy. Having a digital version as well as a hardback is really handy - especially for all the links.

Very inspiring indeed and it shows just how far the hobby has come since the early 1970s.