The Largesse of Wargamers 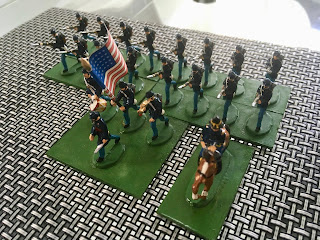 The Union Infantry and their mounted commander. Apologies for the poor quality of the pictures as the light was not as strong as I thought! 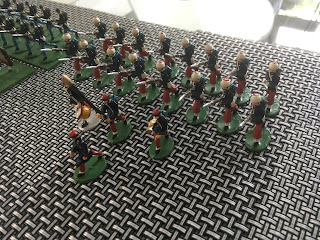 The Zouaves. Repainting the baggy trousers with a blue and white stripe will be sufficient to pass muster for the Tigers methinks although the headgear is a little awry. 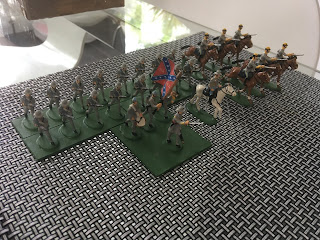 The Confederate Infantry, Mounted Commander and the Cavalry. 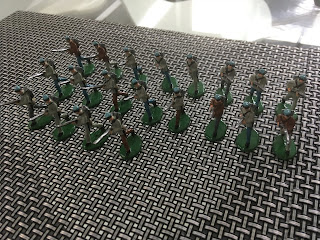 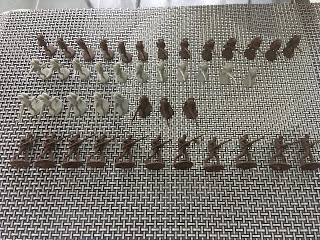 In my experience most wargamers are a generous lot. I am quite sure that any reader of this blog has at one time or another either given or received something of interest - usually as the result of a particular project lying forgotten and unloved in the dark recesses of a cupboard somewhere. We have all been there at some point.

So it was that a chance remark set in chain the motion of events that led to yours truly taking delivery of the the material you see in the pictures above.

The figures are all Spencer Smith 30mm ACW figures and the collection consists of the following:

On many levels this is an incredible piece of good fortune. The painted portion of the collection (and I am not including the plastics in this) could easily be used for something Portable Wargame related with a little tweak here and there. The first thing would be to rebase the figures and also to repaint the the bases themselves. I will also need to finish the paint jobs on the on the two guns and the Union gun crew. I will also tweak a couple of paint jobs so 3 of the cavalry may well become Union troopers and half of the Zouave unit will become Confederate - the Louisiana Tigers probably. It would not take too much work to get the figures to Kurz and Allison standard which is another area I will need to take a closer look at.

Working on the 4 figure infantry, 3 figure cavalry and 2 gunners and a gun Command and Colours type standard unit sizes means that I could, with a little work have a force for each side of 7 x 4 figure infantry (5 infantry and 2 Zouave), 1 x 3 figure cavalry unit, a mounted General and a gun with two crew. Now an army of 9 units and a general is a little on the small size, even by my standards, so adding to the collection to bring it up to the strength I planned would not be too problematic as I have the figures already and the painting style is EXACTLY the look I am aiming for.

One thing that has really struck me whilst experimenting with various permutations of organisation and basing etc is the fact that using armies of the scale and size I am planning is absolutely fine. I realise that seems like rather a strange comment given my fondness for the Command and Colours and the Portable Wargame ‘one figure equals one strength point’ standard but seeing it as part of one’s own collection gives the concept a degree of ‘realness’. In my case it means the system I have invested so much in (not specifically in monetary terms) looks absolutely perfect for my needs and so I can embark on my planned small scale armies with a clear conscience. They look the part in every respect.

The gentleman responsible for this much appreciated piece of generosity is none other than Bob the Old Painter to whom I must extend my most grateful thanks. Bob and I have never met personally (although should that ever happen the beers will certainly be on me!) and our contact has been via our respective blogs, emails and more latterly the odd phone call. Bob is proper ‘Old School’ in his wargaming and if you take a look at his blog you will see what he has been up to recently - including painting some very nice Seven Years War Minifigs British Infantry. I wonder where he got those from?

In many ways the receipt of these figures has, for me, served to close a theoretical door and opened a practical one - and the possibilities are enormous.

So once again many thanks to Bob the Old Painter for this quite wonderful and hugely inspiring gift!

Bob certainly captured the charm of these old figures and I only hope that my efforts will follow suit. For a variety of reasons the Spencer Smith project(s) are ‘front and centre’.

Result! There’s a lot to be said for ‘spreading the love’ in that way.