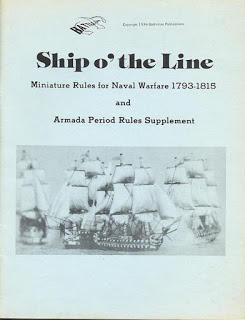 Wow! That was a year that went very quickly! In September of last year I penned a blog post about some ideas for - and here follows the link - Napoleonic Naval Wargaming using an old set of rules from the early to mid 1970s. These were called Ship 'O the Line and were written by the well known game designer, the late S. Craig Taylor. I am a huge fan of his work which also includes such games as Air Force and its expansions, Flat Top and Wooden Ships and Iron Men. The award-winning board game of Wooden Ships and Iron Men which featured a simplified version of the original tabletop rules and used hexes rather than squares for movement and firing.

I am not about to repeat the previous blog post verbatim although I will reference one of the comments I received and apologise profusely for not following up on the request raised! The ignored party will know who they are (and apologies once more!).

I finally got around to organising the printed copy I have of the rules into the appropriate folder and naturally whilst doing so I skimmed through them. When I say skimmed through that is of course David Crook-ese for 'read from cover to cover'.

Several things struck me. To begin with, 'back in the day' the nautical chapter of the denizens of the sadly defunct Newham Wargames Club routinely used these rules for large actions. For sure you had to write individual orders for each ship but it never seemed to be the cause of massive delays in the running of an action. Looking at the rules now I am thinking that they are perhaps best suited for squadron sized actions or smaller because they are rather detailed.

Having said that the rule book is rather deceptive. It is some 32 pages long but half of this consists of optional rules and there is also a several pages of ship names and suggested ship characteristics for each nation - which goes way beyond the usual British, French, Spanish and  American to include the Baltic fleets, Holland, Portugal, some of the Italian States, Russia and Turkey.

The rules themselves are easy enough to use although they are quite chart and factor heavy - this is a regular feature of Craig Taylor's designs - and I suspect that writing orders for individual ships may seem like a chore these days. Personally I have no problem with this although it would present some challenges for solo play.

Where is all this going? Well, there are a couple of things I have been thinking about at a low level. To begin with there is the forthcoming launch of the new Warlord Games age of sail wargame - Black Seas. The models for this are large - 1:700th scale I believe - and the focus of the game appears to be lower level actions - lower level in terms of the number of ships on the table that is. I could see myself using the models with the Ship 'O the Line rules as the numbers needed would be quite modest which is in keeping with my current 'low level naval action' ethos.

The Napoleonic naval section of my library is poised and ready for when Black Seas appears and the models certainly look nice. Cobbling up a couple of forces of around half a dozen ships or so would be an interesting project and is one that is certainly on the menu for due consideration.

I hanker after some naval action, especially after reading Bob Cordery's rules, which are simple and elegant and scratch that itch. Sadly too many other projects on the go at present. Will be interested to see any progress that you can make as well as reading reviews of the latest Warlord Games offering.

Bob's rules are really good for a fun game and despite appearing simple in execution they are very subtle in their approach. I like all of them and the great thing about them (and indeed all of Bob's rules) is that they are robust enough to withstand any amount of tinkering.

Naval games are usually pretty cheap to set up and make for quite handy side projects.

I will probably buy Black Seas but can fully see myself merely using the models rather than the rules etc - simply because I enjoy Ship 'O the Line so much.

Has Black Seas aught your eye from Warlord Games?

To be honest I am more interested in the models than the game itself as I already have a cracking set of rules I want to use with them.

There is potential for sure.

I happened to buy the latest Wargames Illustrated mag, which has a free model/models from the Black Seas game. I admit I have no use for these myself..interested?
Perhaps you could appeal ( shades of Blue Peter c. 1960s/70s ) for any unwanted examples of these - just promise to show us the resulted complete and painted fleet in action in a later blog post. A sort of 'crowdfunding' in action?(!)...

I would certainly be very interested on taking this off you! The ‘crowdfunding Blue Peter’ style idea is a good one (my old friend and longtime gamer of the age of sail, the redoubtable Mr Fox has already mobilised the denizens of SEEMS in a similar way) and so will get a mention forthwith!

I will be getting the game but primarily just for the models.