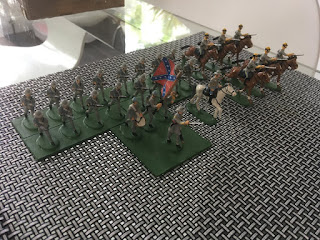 Not a great picture for sure but you can see the overall style. An earlier post on the blog explained the story in more detail.

The 30mm ACW collection infantry, cavalry and gun crews are finished! This has been a wonderful project to run and it would not have been possible but for the generosity of Old Painter Bob - Bob Kett of 20mm Crimean War Wargaming & Other Stuff fame. If you have a passion for what I call 'new old school' wargaming then his blog is a great place to spend a few hours browsing.

I first became acquainted with Bob via my ongoing disposal of Eric's collection - particularly the Minifigs element, of which he is a fan. During our various email exchanges (as well parcels flying backwards and forwards) I mentioned about my 30mm Spencer Smith ACW Kurz and Allison project, for which I had acquired the figures. At this point he mentioned that he had started an ACW collection using both metal and plastic Spencer Smith figures - some painted and some still in the raw plastic - that was now surplus to requirements so would I be interested in them?

The parcel duly arrived and I was frankly gobsmacked by the contents. I quickly decided that the plastic element would be surplus to requirements and so these were passed on to a gentleman in Wales. The metal element was painted exactly in  the style I was planning although not strictly in the Kurz and Allison fashion. they were however, close enough as makes no difference. The collection would need completing - at least to bring up to the strength I initially planned - and I had for the most part sufficient figures already to do so but there was a minor problem. The figures that Bob had used for the Confederates were not the same as I had planned to use so a small order was sent to Spencer Smith for the correct versions. Picky I know but bear in mind I was after a stylised and wooden look for the two armies.

Then came the moment of magic.

As a throwaway comment I nonchalantly asked Bob if would not mind painting up the extra figures I needed so that I could replicate the contents of the board game Battle Cry. To my delight, surprise and eternal gratitude he agreed to do so and so now my painted collection stands at 44 infantry, 6 gunners, 9 cavalry and three guns a side.

The figures needed rebasing as Bob used multiple bases and I wanted the figures individually based using MDF. This has now been completed and a few bits and pieces of touching up have been undertaken - nothing serious, just the inevitable wear and tear of the odd paint chip.

I have gone for 25mm circular bases for the foot and 'pill' shaped 25mm by 50mm bases for the mounted troops. These were sealed in matt varnish, given two cots of Humbrol Satin 131 and then matt varnished. When I post the pictures you will see what I mean.

On the subject of pictures I apologise that there are no pictures of the refurbished models yet. This is simply because by the time I get home in the evening the light is really poor and taking indoor shots under artificial light makes for horrible images. I really need natural daylight to show the figures in their best light. I may be able to get some pictures this weekend but I am going away for a family do first thing Saturday morning so it may be a little rushed. In any event I need to finish the guns for the crews to man. The picture above is of the figures that Bob had painted in their original guise so you can see what I mean by the technique. All I have done is to rebase and freshen them up.

In closing I would like add a couple of things. I am sure that most readers of this blog have been the either the recipient or benefactor of a fellow gamers abandoned project. This can be large or small and may or not involve goods or monies changing hands. This in itself is one of the great things about our hobby in that for most part we are generous souls. An extension of this is when a gamer uses their own time to assist in another gamer's project - often to the detriment of their own pursuits. This is altogether a different order of generosity and so these two reasons - material goods and time I would like to extend my most grateful thanks and appreciation to Bob.

I look forward to seeing these in action. The generosity of fellow gamers is always one of those unexpected pleasures of the hobby. Long may it continue.

Bob is a thoroughly decent chap and his generosity has really helped me out in so many ways. I am lucky to have made friends with so many generous spirits! I hope to have the guns done by the weekend and then can think about running my first game with them.

I can't begin to tell you how excited I am about that!

Looking good Dave! The plan is coming along very nicely!

I am very close to going live with the collection and am only sorry about the pictures (or rather, lack of!). If I get a chance over the weekend I will have a photoshoot and get some up on the blog.

War gamers are often a kind and generous lot indeed. Lovely figures which l look forward to seeing in action.

Bob has done a really nice job with these and has captured both the simplicity of the old toy soldier style and that of the images depicted on the Kurz and Allison prints.

I am looking forward to getting them into action.

He certainly is a generous chap and I am also looking forward to getting them into action!