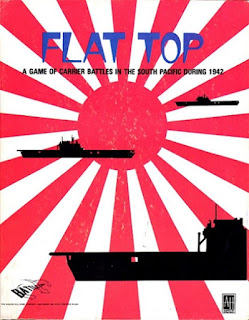 The original version of a truly fantastic boardgame. Avalon Hill took the game to another level in terms of production values. 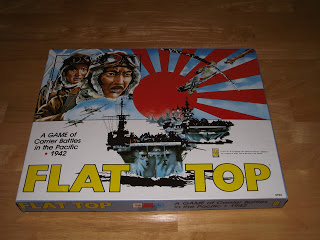 The ‘new’ version - and what box full of naval and aerial goodness!

Now this is a little on the embarrassing side. Way back in the late 1970s I purchased a copy of the board game Flat Top by S. Craig Taylor Jr and then published by BattleLine. As an aside I purchased my copy from Tradition when they were open in Shepherd’s Market, Mayfair. I was working in Berkeley Square at the time which was just around the corner so many a happy lunch hour was spent browsing in that goldmine of a shop.

The game is based on the carrier battles in the South Pacific during 1942 - not including Midway although the Avalon Hill version includes the ships required to run this - and, at the risk of being repetitive,  it is a truly fantastic experience. S. Craig Taylor Jr was one of my favourite game designers and using the Flat Top system he produced a game called CV published by Yaquinto which covered the Midway campaign.

The reason for the embarrassment is that I sold my original Battleline version many years ago after having played it death. I then repeated the rather hasty disposal after I had acquired a copy of the Avalon Hill version some years later from Mr Fox which was again moved on during one of my periodic reorganisations - primarily as I had not fully appreciated the full potential of the newer version, a story Rather depressingly repeated back in 2012. So that is three copies of the same game that have gone through my collection!

For what I hope will be the final time I have acquired a further copy of the Avalon Hill version and this time I have seriously thought about exactly what I want from the game and how I will be able make use of it. Great thoughts have been thunked for sure!

A number of these ideas I will outline in a further post and they will certainly fit within my avowed intention of having a frugal gaming approach. In the meantime though, take a look at the components. 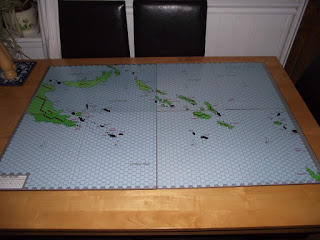 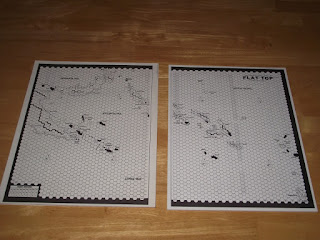 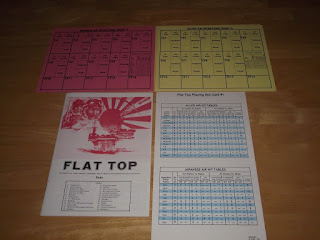 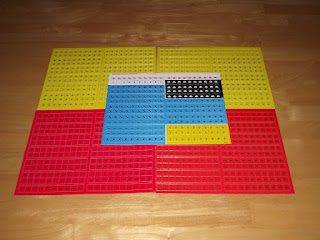 Without going into too many details and aside from what the game is designed for I am looking to the Great War and some ‘Hunt the Raider’ style actions. Something that will not require a huge amount of setting up in terms of material.

That is some game! I always rated the AH games that I owned, and this looks like a real cracker!

I hope that it gives you many hours of fun and enjoyment.

That map looks almost worth the price of entry on its own! You know, I would not have thought that a game with so many components could be 'played to death'! You must have had years of fun with this!

We played a fair number of games some years (OK, decades) ago using the components of BL & AH Flattop and Midway. The game moderator would make up a scenario and the players would get the fog of war. There would be 4-6 players with 2-4 maps and a separate room for each side. The moderator used the plotting maps to keep track of the interactions. Some games stretched over two days.

Flat Top is a classic! My AH version has been sitting in silence on my shelf, unplayed, for at least 30 years. I wonder if I still remember how to play?

I bought rules, sold them and then re-bought them, but only once. Three times is, well, what can one say? Let's hope you get to keep this one and enjoy your games once again. I turning more to the idea of boardgames these day, but not sure exactly what I want...

I am impressed that you played it a lot, it was a huge and seriously complex game! I bought the Avalon Hill version in the early 1980s ( from a games shop in The Lanes in Brighton, I think ) and then realised what a big commitment it would be - and I had no regular opponent to play it with! It remained 'unpunched' in my parents' loft until about 5 years ago, when I sold it on Boardgame Geek. The buyer was a nice chap who hoped to use it as the basis for a 'megagame' on the Paddy Griffith model, which seemed quite a good idea. Anyway, good for you, at the very least it's just a fantastic thing to look at!

I think that previously I tended to look at the game through a rather narrow field of vision but now realise that this is certainly more usable above and beyond the designers original intention. The maps are crying out for a whole variety of ideas and I think that now I am better placed to take fuller advantage of it.

I am really pleased to have added this to the colllection, and for the last time!

It was the earlier Battleline version that an old gaming friend and I really hammered. Oddly enough I have never played the Avalon Hill version although I did play (and indeed, owned a copy) CV by Yaquinto. We spent entire weekends working through all the scenarios and usually played them from both sides. As I recall I was rather more successful with the Japanese than the US!

For me this is a game that will be bigger than the sum of its parts.

I only ever did that with CV - the Midway game using the same system and published by Yaquinto. It worked well with half a dozen players but went totally against history as the Japanese completely ignored Midway and just went carrier hunting.

It did not end well for the US!

Despite everyone saying so I do not think it is an overly complex game. For sure there is a lot to be keeping tabs on but the subject matter itself is challenging enough. I was flicking through the rules and was surprised at just how much came back to me after many, many years.

I would like to look at Avalon Hill’s Midwat and all the additional stuff there is to go with it as a comparison.

I think in the past I tended to view the game through a narrow historical lens but can now see beyond the obvious subject matter. I also have access to the articles and additional scenarios/optional rules from the old Avalon Hill General which will be useful - especially as the Royal Navy also feature.

In many ways I prefer board games but the challenge now is finding what will work best. For example, I really enjoy the Command and Colours series but are they the best way to game the respective subject matter? I guess it depends on what you want going forward - I have some ideas about this but time will tell.

It is a large game but it is more about resource management than anything and so the number of counters on the board at any one time is quite small. It is complex but then so is the subject matter but having said that I think the game is pretty smooth to run. S Craig Taylor Jr, the designer of this and other games that are dear to me, had a certain style with his rules and so you can see similarities across them. If you like the system of one the chances are that another game will not be quite so tricky to pick up. Personal choice really.

I think that this will be the last time I buy it and the reason for this is that I am better placed to be able to use it beyond its immediate potential.

Interesting that you sold yours via Boardgamegeek - the buyer certainly seemed to have some good ideas to go with it!

I have an electronic version but like a lot of my projects it is waiting its time to shine .. it will come .. thanks for the prompt and endorsement

I had no idea there was an electronic version of this game - I would be very interested to hear more about this for sure!