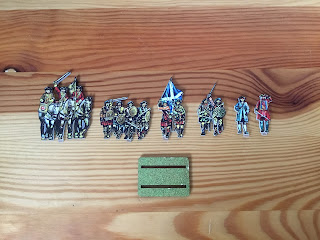 A selection from the 28mm Jacobite Rebellion range 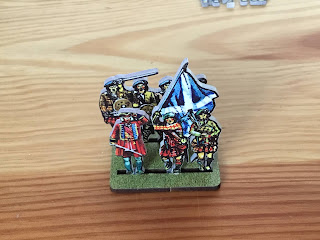 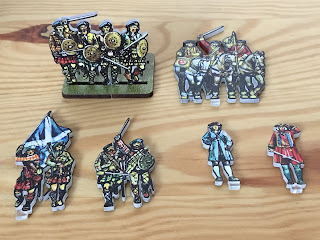 Another view of the samples - note that lovely Peter Dennis artwork

Nothing on part 2 of the Waterloo game just yet - simply because I have been out and about following the decorating and I also realised what the date is. June 15th - three days until the 18th which is of course the 205th anniversary of the actual battle. I figured it would be appropriate to post this on the anniversary of Waterloo so there you have it.

In the meantime though, a chance exchange of emails with that very nice chap Andy Callan led to a small envelope arriving this morning with the above samples from the Jacobite Rebellion range produced by Wofun Games .

Wofun produce a range of plexiglass 2D figures from various periods in both 18mm and 28mm with the artwork by Peter Dennis. In many ways these are like Peter’s paper soldiers but without the hassle of cutting them out!

Andy is writing the rules that go with the figure ranges (check out the link above to see what is available) in the same way that he has with the Paper Boys range published by Helion.

I really like these figures and as a reluctant painter they certainly tick a number of boxes - much to ponder methinks!

These do look very nice but I'd miss out on the 'therapy' of cutting out the paper figures :)

They look even better than they do the website!

I must admit that I am very tempted ...

These figures look great, I shall pop over and see their range.

I think the wo-fun figures are an excellent development for the hobby. I have been following along this project for many months now. Whilst they are primarily marketed as board game pieces and perfect for such games as commands & colors, they are also good for traditional wargaming.

In 18mm scale I think they look even better, I have been very tempted by the ancients range in this scale. This 'unboxing' video on YouTube really shows off the quality of the product. Of course Peters artwork and paperboys are wonderful, but printed on 2mm plexiglass that snaps out and clips straight into the bases takes them to another level. Main issue at the moment though is price as a lot of people are saying.

I am a little ham fisted when I cut things out so would not miss that aspect. Funnily enough I was toying with the idea of printing the paper soldiers on to stiff card or similar but this would still mean cutting them out!

So am I but to do it justice would involve a major rethink.

It is well worth a look for sure!

There is a lot of potential for sure!

I had not thought about 18mm but can see the attraction as the lack of 3D would be less obvious in a smaller scale. Price is an issue and if I were to go for it a major rethink of what I do and how I do it would be needed.

I will watch the company with interest!