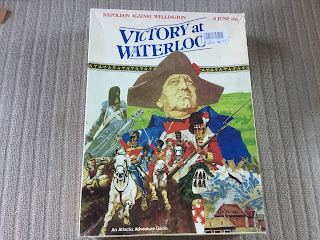 What a coincidental find! My first visit to a charity shop for nigh on 3 months and on the 18th June I found a copy of the above for £2.

The end of the first phase of the action at game turn 6 was fitting as it enabled me to address a couple of things. To begin with from Game turn 7 the Prussians may arrive and also the French can call upon the Guard. I had also made a mistake with the artillery as it only scores a hit on a unit at a range of 1. At range 2 or 3 it can only cause a disruption result so the ‘destroyed’ French artillery has dramatically reappeared.... 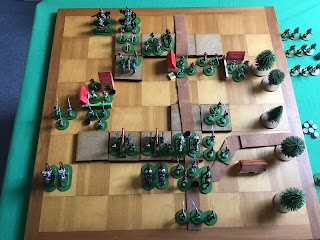 French Turn 7 - 7 Action Points. With a renewed sense of urgency the French pressed on. Their Curassiers attempted to charge the Belgian horse but to no effect whilst their infantry resumed their assault on Hougoumont. At last the Scots Greys received a hit whilst moving up the Brussels road came the leading elements of the Guard - in this case the Young Guard. 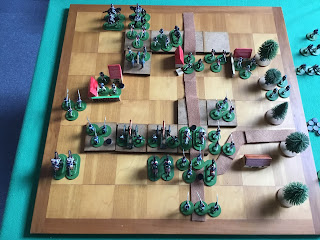 Allied Turn 7 - 5 Action Points. The Prussians are coming! The first troops of Blucher’s army appear next to Papelotte. The Belgians in Hougoumont are holding their own as are their mounted countrymen. The ridge is holding but will the French be able to prise them off it? 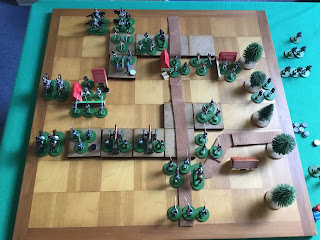 French Turn 8 - 6 Action Points. The attack on Hougoumont eases off whilst the French redeploy for a fresh assault. Not waiting for the outcome the remaining French cavalry is ordered to move around the chateau to attack the ridge from the right flank. Meanwhile the Scots Greys are finally seen off whilst Ney busily rallies the conscripts for a fresh assault on La Haye Sainte. 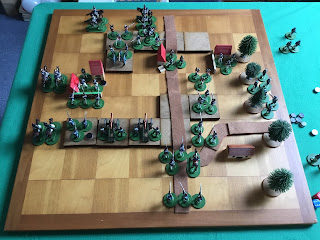 Allied Turn 8 - 6 Action Points. More Prussians arrive and so to gain some time the Duke some infantry on his left flank to advance from the ridge between La Haye Sainte And Papelotte against the massing French. The Belgian cavalry fall back and the ridge from the chateau to the Brussels road is suddenly covered in squares in readiness for the cavalry assault to come. 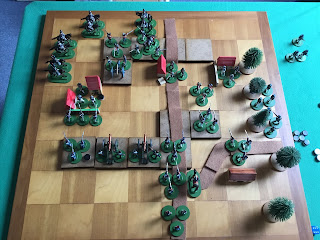 French Turn 9 - 7 Action Points. Mindful of the fast approaching Prussians Ney sends some infantry out to engage them on his right flank. Meanwhile the Old Guard has moved up the Brussels road whilst the cavalry masses to the north of Hougoumont. The situation looks serious but are the French in danger of losing faster than the allies can win? 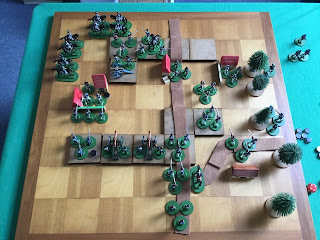 Allied Turn 9 - 6 Action Points. The Prussians continue to emerge from the woods on the French right from Papelotte southwards. The Duke and his infantry are rooted to the ridge awaiting the inevitable cavalry attack but for the moment are content to be spectators. From the great man downwards, all know that they will not waiting for long. 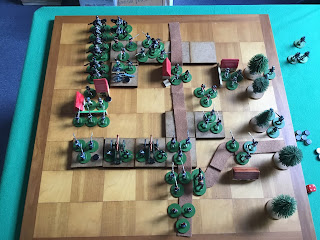 French Turn 10 - 6 Action Points. After some ineffective fire against the chateau all eyes turn to the great mass of French cavalry thundering you the right flank of the ridge. Their impetus was blunted slightly by the ground and the squares of the infantry held firm. The British artillery suffered casualties as they dare not leave their guns. 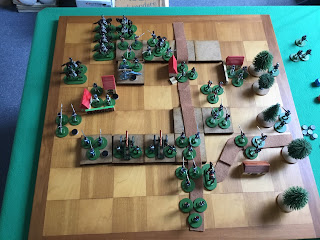 Allied Turn 10 - 5 Action Points. The gallant Belgians in Hougoumont succeed in driving off their assailants whilst to the north the French light cavalry streams back down from the ridge chased by canister from the British artillery. 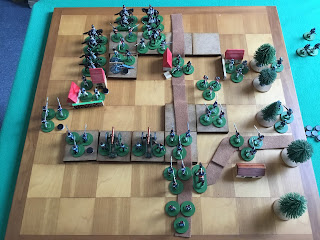 French Turn 11 - 6 Action Points. Once again the French cavalry thunder up to the ridge but again to little effect. The Cuirassiers manage to push the Belgian cavalry back which could prove to be costly. 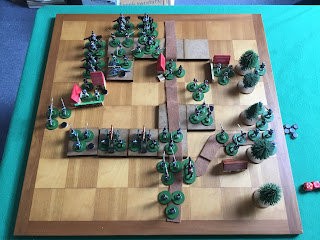 Allied Turn 11 - 7 Action Points.  The final Prussians arrive close to Plancenoit whilst the great cavalry battle continues on the opposite flank. The ridge continues to hold and the Duke now has a large force of infantry deployed from Lay Haye Sainte to Plancenoit so pressure can at last be applied to the flank and rear of the French position. French Turn 12 - 5 Action Points. Breakthrough! The gallant Chasseurs charge the British artillery once again and succeed in destroying the guns line (these were painted by Ray Rousell hence their panache and flamboyance....)! The allied infantry is now isolated on the ridge - can Ney apply the coup de grace? 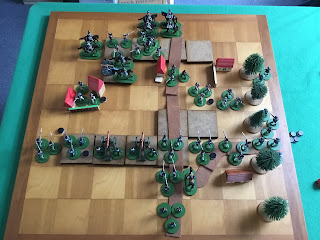 Allied Turn 12 - 7 Action Points. The garrison of Hougoumont chases off yet another wave of attackers and in doing so secures the flank for the time being. The infantry of the left, including the newly arrived Prussians, are gradually shaking out into an ordered line with the French in the vicinity of Plancenoit already being engaged. If only the ridge can hold firm - “Give me night, or give me Blucher....” 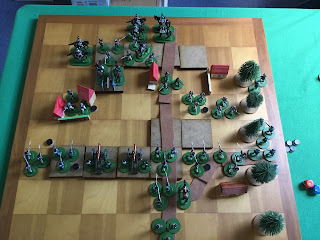 French Turn 13 - 5 Action Points. The impetus of the French attack was fading rapidly. The cavalry, despite their success against the British artillery were unable to make any further headway against the resolute allied squares. The bulk of their infantry was too far away from their Cavalry to be able to influence the outcome and now that the Prussians were beginning to make their presence felt a successful outcome to the action seemed further away than ever. Was there still time for a final twist in the tale? 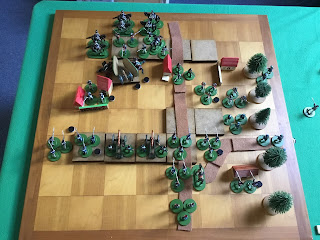 Allied Turn 13 - 5 Action Points. The Prussians began to bend the French line back on itself via Plancenoit whilst over on the other flank the gallant Belgians in Hougoumont successfully dispatched the Chasseurs milling around in the British artillery gun line. Their mounted comrades successfully charged the Cuirassiers and finally succeeded in forcing them back. Sensing a decisive moment the Duke stood in his saddle and waved his hat furiously above his head. Everyone, down to the lowliest drummer, knew what he meant.

Marshal Ney, astride his fifth horse of the day, surveyed the field of battle through the smoke and haze of a summer sunset and knew that the day was lost. His cavalry was a spent force and his infantry would be forced to fight just to survive the approaching Prussians. His plan had failed but where was the Emperor? Ney was a fighter and his master provided the brains but on this occasion this was noticeably absent. Wearily he turned his horse around and began the long trek back to the Emperor’s headquarters and then to who knows where. The Napoleon he knew, the master f his destiny, no longer existed.

I called a halt at this point as it was impossible for the French to achieve their victory conditions of destroying 7 allied infantry units and exiting three of their own off the allied baseline. The final casualty count looked something like the picture below. 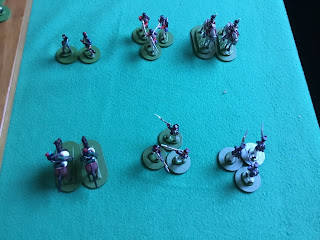 The Allies lost the Scots Greys, the Guards and the artillery whilst the French lost the Chasseurs, a unit of conscripts and a line infantry unit.

The game played rather well (aside from my minor artillery faux pas) and it is certainly one I will revisit - in fact I plan to do so on my hex mat with larger units and possibly a better aligned (and expanded) order of battle.

The author, Jay Ward, has been in touch with me with some thoughts and ideas which I will experiment with going forward so a big thank you to him for this and also for providing such a great toy to play with!

This is very good stuff. Apart from anything else, i have to say that the wooden chessboard gives the whole thing a very antique look - this is obviously a very ancient and noble game you are playing here! Excellent.

I have a pleasing image of you spread out on the floor in the charity shop, checking the Waterloo game was complete.

Our charity shops are still closed - we have masses of stuff to get rid of, so we'll be pleased to see them in business again. We never get wargames or anything interesting here - it's all videotapes of Knight Rider and books by Jilly Cooper. And cocktail handbags - "used once".

Great report and a visually pleasing game! I'm keen to give the scenario a go myself, having tried a different one of Jay's games and enjoyed it.

A very interesting battle report, and one that show that you can have a cracking good game in a small area with a very limited number of figures.

Looking at it, I keep getting ideas for other battles that could get the same treatment (e.g. Gettysburg, Bull Run). It’s something I might apply myself to when I have enough time to do it justice.

Thanks, an excellent work out for the game. I'll add victory conditions to the list of things to think about further!

Lovely to see a picture of Victory at Waterloo. A great game, one I ignored at the time and finally caught up with just a few years ago!

I will certainly use the chess board again but it would look better with smaller figures. I was very pleased with the overall look though.

Charity shops and boot sales I have really missed this Year but in the case of the Waterloo game I was able to count the counters standing up as there are not many!

Jelly Cooper and Knightrider - now there is a winning combination!

It was a lot of fun and the plan is to run it on hexes and with slightly larger units.

It was very much a ‘proof of concept’ game and it worked really well. I want to try some other historical battles and using a larger grid - 60mm is really too small for 25/30mm figures.

Once again, it is getting around to it!

It was a lot of fun and I will run it again on hexes and with larger units.