“A Cheesebox on a Raft” 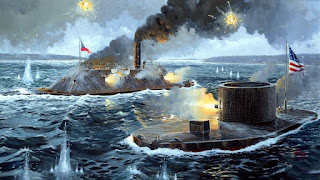 Up close and personal - The U.S.S. Monitor and the C.S.S. Virginia trading short range shots during the Battle of Hampton Roads

Ok then, I have not followed my ship building plan entirely but it is still heading in the right direction! Yesterday I began work on the first models of the final batch for the ACW project. The first of these featured a reworking of the largest of the Confederate casemate ironclads into something a little more historical looking. Work on this has progressed to the undercoating stage so she will be making her appearance in a day or so. Whilst I was waiting on some glue to dry I decided to tackle a couple of additional simple models that were part of the programme but were originally intended to be built last of all. The two ships are for the Union and are both Monitors.

The first of them is the famous U.S.S. Monitor herself - and she must have taken me all of five minutes to build! She has the distinction of being the only model in my collection that does not have a funnel! I will also be building the Confederate C.S.S. Virginia at little later although she will require rather more work than her famous adversary. The other monitor is another twin turreted Monadnock type. By adding these two models the Union monitor strength will be six vessels from the enormous triple turreted white elephant the U.S.S. Roanoke down to the originator of the the type, the U.S.S. Monitor herself.

As with the mystery Confederate ship I am working on the monitors will make their appearance in a day or so. This will be three models down and seventeen to go!

Considering the entire project was only ever intended to be around a dozen or so models I have shown remarkable restraint in keeping the total under sixty....