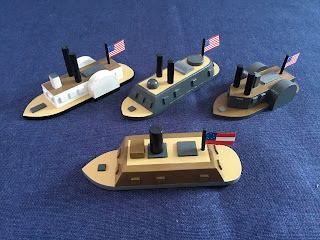 The combatants in the last adventure of the C.S.S. Arkansas. The only Union ship in the above picture that will feature in the next action is the U.S.S. Queen on the West (top left).

I have come to the conclusion that the C.S.S. Arkansas has become something of an obsession with me as she features in quite a number of battles I have fought - and this weekend will be no exception! I have had a radical rethink about the whole gunnery/to hit/to damage system for the rules and have come

up with something that I believe will be the solution to the problem I never knew I had….

I have veered between a single dice roll to cover hits and and damage to having a dice to hit and then a dice roll to damage. Both systems have worked but neither in the way that felt, well, Portable Wargame-ish. This is important to me as the rules I have developed are meant to have Bob Cordery levels of complexity with David Manley levels of detail. I think I may well have stumbled on something that will go some way towards satisfying both.

In a nutshell Bob’s ACW naval rules use a number of d6 for gun dice per ship type with the amount of d6 rolled reduced by range. The firing player rolled the appropriate number of d6 and either hit or missed to a greater or lesser extent. Essentially each d6 rolled scored 1 point of damage for every 4 or 5 rolled and 2 points for a 6. David Manley’s rules (Dahlgren and Colombiad) use opposed rolls - rather like DBA or similar - to determine hits and damage. The key here is that the dice rolls are opposed.

I had been primarily working on the ‘roll to hit then roll to damage’ basis. In other words, the target had little involvement in the process other than to ‘take it’, or not, as the case may be.

For a more inclusive system I am thinking that using opposed rolls may well be the way forward as it means that both players are tapping into the world of variables - aka adding to the fun factor!

I realise that without a copy of the rules a lot of what I am writing may not make a great deal of sense but please bear with me!

A firing ship will have as its ‘gun dice’ the number of gun factors PLUS the associated penetration factor. For example, the C.S.S. Arkansas has broadside guns rated as 2 (gun factor) / 3 (penetration factor) which means in the new world this would translate as gun dice of 5d6. For each d6 rolled a 4 or 5 is a single hit and a 6 is 2 hits AND entitles the firer to another d6 roll. So far so good. The target ship has a defence factor equal to its overall size PLUS any armour factor. Once again, using the C.S.S. Arkansas as an example she had a defence value of 3 (she is rated as a medium sized vessel) and an armour rating of 3. Adding the two together gives a defence dice factor of 6, meaning that she rolls 6d6 to defend herself from incoming fire with the same chance of negating hits as for scoring them i.e. 4 or 5 negates a single hit, 6 negates 2 hits AND gets another d6 roll.

Although on the face of it this seems to be quite ‘gamey’ there is most certainly a method in the madness. A ships ability to fire is determined by the number and effectiveness of its artillery whilst a ships ability to take damage is dependent on the overall structure and the level of protection or armour built in to it.

Using this system also means that I have a simple mechanism to reflect critical hits. My thinking at present is that if a firing ship scores sufficient hits to exceed the target ships defence value and these have not been negated then a critical hit is rolled for. This means that ships that are better armoured are less likely to sustain such damage whereas, for example, a wooden warship with no defence other than its size could suffer more readily - in the context of the period I have no problem with this as a potential outcome. The jury is still out on that one! 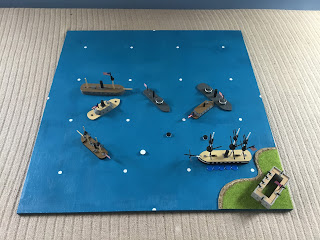 The biggest challenge I have experienced with this has been largely of my own making. Initially I was happy to use the system that Bob had devised in the ACW rules of his Gridded Naval Wargames. They worked a treat but I wanted them to better reflect specific ship types, not just the addition of a ram bow. I should clarify that by explaining my thought process.

I believe (and I stand to be corrected by those with greater knowledge than I of ship building!) that a a ram attack depends on a number of factors. The most obvious is the presence of a ram bow and the hull strengthening that usually goes with it. The size of the ramming ship, its speed of approach and the angle of impact are all factors that need to be considered. All of these, when taken as a whole will determine the number of hit dice rolled for damage. For example, the C.S.S. Arkansas is a medium sized vessel fitted with a ram bow. Her size gives her 3d6 and the addition of a ram bow gives her a further d6 meaning 4d6 in total. Let us assume she is able to ram an enemy ship square on the beam. This would give her an additional d6 making 5d6 in total. If she was able to hit the target at speed (in this case 2 or above) this would give her an additional d6 making 6 in all. The speed issue is a moot point in that a captain ramming a ship would want to avoid excessive damage to his own vessel so a more measured approach may be appropriate! Assuming that damage is inflicted then once again the rammed ship will have a chance to reduce the impact based on its size. A rammed ship that manages to negate more hits than it receives instead passes the excess to the ramming ship as damage - a case of the biter, bit!

In the previous action there were two instances of ships having rammed, drew apart (whilst still in the same square) and then launched a further ram attack. That seems a little too neat to me so from here on in a ship must enter a new square in order to carry out a ram attack. Bear in mind that many of these ships were not only slow but also not particularly handy in the old manoeuvring stakes!

The whole ramming thing must seem hellishly complicated but it really is not. I am a great believer in explaining things thoroughly -  even if they do not make a lot of sense!

My 3 x 3 rules were derived from my main set and were intended to be a fast play alternative to them. This no longer the case as I am very close to having a single set of rules that will work readily for either the standard game or the 3 x 3 variant. At this stage the only real difference I can see is around speeds and distances. My thinking is that 3 x 3 will be a variant in small points of detail only and will play almost identically to the parent set.

Three steps forward and two back seems to have been the way with this project but overall it continues in the right direction. The finishing line is in sight and whilst it may not be in the shape or form I originally intended it will at least be how I want it. The proof of the pudding is in the eating, so they say, but in this case it is in the testing so….

Look to tomorrows post to see how it all hangs together (or falls apart!)….

You’re doing it again; being a big tease!

You know me too well! Actually the action is one suggested by a fellow blogger but it will serve as a great testbed for the alternative firing system I am experimenting with - as well as giving the ramming rules an airing.

I will say no more at this stage….

I’m looking forward to seeing the next action David…

The proof of the pudding will be tomorrow but I think I may have cracked it.

“The chances of anything coming from blogs, are a million to one” he said….

Funny you should mention Thunderchild and Tripods….

David -
The concepts look promising! I will suggest, though, that you do look at speed as an added factor in ramming. I have a feeling that any ship's captain eyeing that tasty target beam on, will (a) will want to close the distance as rapidly as may be, that the target don't get away from him, and (b) will want to hit it as hard as possible - whatever the damage done to his own vessel. He's want to do that, even if his own ship lacks a proper ram.
Cheers,
Ion

Thank you old chap! I am hopeful that this may be it but only testing will tell so tomorrow should be entertaining at least (and will strike a chord with you….I will say no more!).

I will certainly factor in ‘high speed ramming’ and for the reasons you state BUT this will be at a penalty as the risk of damage to the ramming vessel would be higher methinks.

All the best and thanks once again for your support and suggestions!

I have been away from teh bogs in a long time
I see you have EPIC work in the ACW Naval .. looks fantastic
Models have charm and do the business - well done

Thank you old chap and great to hear from you again!

I have had such fun with this project and the best thing of all is the confidence and inspiration it has given me to tackle any number of similar ideas….

You have been warned….

I hope to have the AAR up on the blog on Sunday so watch this space!