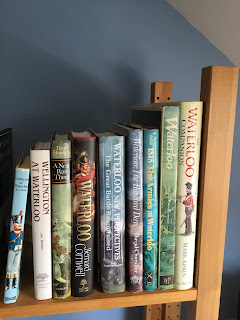 1815 section of my library. Small but perfectly formed for my purposes.

“It was a hot afternoon, the 18th of June, and the ridge was a demon….” (Diddle, diddle, diddle ding….(that is the thinking piano part))

“The Allies threw shade, at the Frenchmen’s parade,

And their bayonets gleaming.”

Trying to pen a poem about the Battle of Waterloo to rhyme with Bobby Goldsboro’s 1970s hit Summer, the first time, has been a mildly amusing and whimsical experience but try as I might it did not seem to work out and besides, it is currently far too hot for that kind of effort! I only got as far as “I told Marshall Ney, that the farm of La Haye, was a part of my thinking…”

Seriously though, the anniversary of arguably one of the greatest battles in history never fails to draw me back to Napoleonics and misty-eyed memories of painting hordes of Airfix plastics ‘back in the day’. For me it was all formative and inspiring stuff and even now, old and world-weary cynic that I am, I can still feel a thrill thumbing through the pages of any one of the books you see above.

A couple of years ago I refought the battle using Del Prado Relive Waterloo figures (now no longer part of the collection) using a square based version of ‘Waterloo A La Carte’ available from the Numbers, Wargames and Arsing About blog written by the legend that is Jay ‘Old Trousers’ Ward. It was a great game to fight and worked out rather well - it was spread over four blog posts - and I would certainly revisit it at some point but this time using the block armies. As a reminder the initial set up looked like this: 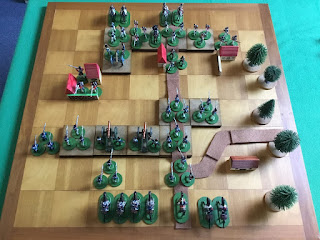 Blimey! It almost looked like a sensible wargame - whatever next? 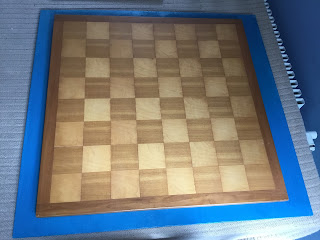 My cheap and cheerful handmade chessboard that formed the basis of the battlefield acquired at a boot sale some years ago for a ridiculously cheap price (£2 if I remember correctly). The squares are 6cm and the 8 x 8 grid is perfect for Portable Wargames. 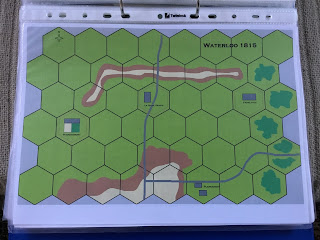 ‘Old Trousers’ original hex based map - there is now available a similar version covering Quatre Bras which I will be casting an eye over at some point.
I have often mentioned of my fondness for the Battle of Waterloo and the significant role it has played in my wargaming journey. In many ways the campaign of 1815 contained in a microcosm all the elements of over twenty years of war - glamorous uniforms, the massed cavalry charges, columns attacking lines, grand batteries of artillery and clouds of skirmishers scurrying hither and thither. There were moments of great gallantry and of sheer panic and rout and above all the ebb and flow of generalship. I remember reading somewhere the campaign being likened to a Greek Tragedy with its extremes of fortune on either side - I can’t comment on that as my knowledge of Greek Tragedies is rather limited - the benefit of a non classical education I suppose (he says, tongue firmly in cheek) - but the few days of the campaign certainly pack a lot in.
Thumbing through my 1815 library has been a real pleasure in a nostalgic kind of way - I certainly have some very pleasant Napoleonic memories to enjoy - and needless to say it has triggered a few ideas, nothing fancy or far reaching, just something for a change.
I shall make a point of watching Waterloo again - for the record I had not planned to but hey, ho - and will doubtless reach for my copy of Bob Cordery’s Portable Napoleonic Wargame for further inspiration and who knows? I may even do something with it!

"Summer, the First Time". That certainly got adolescent hormones racing back in the day. Airfix and the 1970 film pulled me away from ACW and WW2 into a fascination with (British) Napoleonics that has now entered its sixth decade!

It’s June 18th … and a wargamer’s thoughts turn - quite naturally - to re-fighting the Battle of Waterloo. Even those who are not obsessed with the Napoleonic period (like me!) get that itch that needs to be scratched! I haven’t done it this year … but one year I will!

I never saw the film until around 1980 but I had a paperback copy of the Ugo Pericoli uniform book released in support of it. It was my constant companion when painting the plastics for sure! It eventually fell apart from repeated use but I now have a hardback version. A Near Run Thing is also one of my favourite books on the battle.

“Summer, the first time” popped up in conversation a few days ago and it kind of got in my head and whilst Waterloo was not on “the last day of June” it was close enough for me to play around with!

It would certainly make a cracking game using the Portable Napoleonic Wargame and I am sure you will get to it at some point! The idea of fighting elements of the battle in bite sized 3 x 3 chunks may well be the way forward to be able to fight it sooner.

Something to think about for sure.

I too cut my teeth on Airfix toy soldiers. Your original chessboard game post was one of the things that led me to Bob Cordery's Portable Wargames rules. As far as my early, poor attempts at painting it was the Funk and Wagnels uniforms of the Napoleonic wars, which I still have and am pleased to say they are still in good condition. I love your blog, keep up the good work!

I wish you joy of Waterloo David!

I was just looking at the Brochure you gave me for the film so many years ago. Stirring stuff.

Thank you for your kind words and continuing support old chap! I am delighted that my Waterloo on a chessboard game helped you onto the Portable Wargame path - your output has been both truly prodigious and hugely inspiring to me and many others! It is a cracking system and there are no limits to what the core ideas can be used for.

I remember that book by Funk and Wangels and for sure whilst there are probably better and more detailed titles available books like that and the Pericoli title stat with you.

Once again many thanks for your ongoing support with the blog - I want to get some games in and sooner rather than later!

Ah yes, a cracking day out fighting Leipzig Little Wars style- it took weeks for my knees to recover! It is a really good film brochure - I also have the one for Lawrence of Arabia which is excellent as well.

David,
The reminder about your chessboard Waterloo game sent me looking back over your posts; I've now copied your battle report and pictures into a file to which I can refer easily, so thanks for that!

I recently read a blogpost by Archduke Piccolo on using a variant of Shambattle to fight Horse & Musket era games on a square grid which has inspired me to try to create a gridded game of the entire campaign, either on a larger board or by using separate boards for Ligny, Quatre Bras, Waterloo and Wavre. Your Waterloo game will be very useful to help me devise gridded battlefields for the other engagements.

Many thanks old chap and I am delighted that the posts are useful. I was looking at the board over the weekend and was thinking that I really should make more use of it.

I remember reading about Shambattle sometime ago so will check out the good Archdukes post - his stuff is always good for ideas and entertainment value!

At the time of the Waterloo chessboard game I had half an idea about using the concept for refighting historical battles and the Waterloo campaign with the actions mentioned would appear to be an ideal candidate. You have got me thinking about historical 8 x 8 battles….

I am sure that would not be too much of a hardship! I am also sure that when you switched it on the TV your first thought would be ‘Mama Mia, here I go again’….