Thoughts on War in the Age of Imperialism 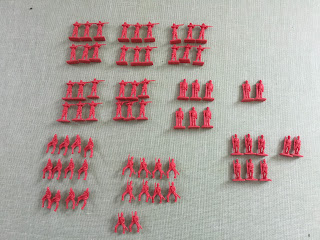 The above represent one of the forces from the game - note the 30 (5 x 6 figures) infantry and the selection of mounted types. There are horses for them as well! 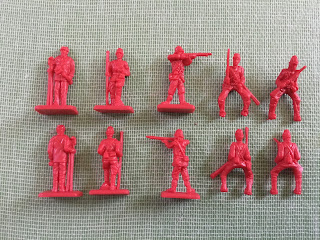 Close ups of the figures - front and back. They are not the greatest plastics you will ever see but they have one significant advantage - there is a lot of them! 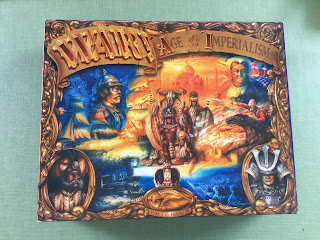 The rather lurid looking box lid for War in the Age of Imperialism.

Sometime ago I acquired a copy of the Eagle Games Age of Imperialism - a strategic level Colonial board game. As is usual with this type of game it was always about the components rather than the game itself, in this case rather a lot of 1:72nd scale generic plastic figures - a selection of which you can see above, and that is just one of the coloured sets available, there being five in all.

The figures are quite basic but are fine for what I have in mind. The infantry are solely available in the standing firing pose which would probably put some gamers off but I can live with it and besides, the command box will certainly add some diversity. They need some additional bits and pieces to make then viable as an army so a swift look at Hat Industries has furnished me with the aforementioned command set (40 figures in all including four mounted officers), a box of artillery and a box of Gatling guns. This will flesh out the choices available when it comes to making up the various forces I am thinking about. In the short term though, they will need some opposition. So what would be best suited to face some Zulu War looking British Infantry? Well, after a lot of careful consideration for all of several minutes I did the only sane thing I could think of.

Ordered a box of Unmarried Zulus…

In all seriousness, the idea is to use the ‘British” infantry figure as the basis for other European style pith helmet wearing Colonial forces - there would certainly be a degree of artistic licence in terms of fine detail but then if I wanted that I would probably be using better quality figures. The set up will be firmly Portable Colonial Wargame based meaning the forces will be small in terms of the number figures - small enough that even I could manage to slap some paint on them!

In the fullness of time there will be competing European Colonial forces - forces that will inevitably require naval support - alongside numerous indigenous tribal types of various sorts.

Something to think about anyway - and with the possibility of a VSF spin on things as well!

Gosh I remember reading that! The figures are pretty basic but will suffice as a cheap solution - certainly for what. Want to do anyway. Shambattle eh? Now that is a blast from the past and no mistake.

It is unlikely that I would ever play Age of Imperialism as such but the figures are really useful. I am thinking about the naval support as well….