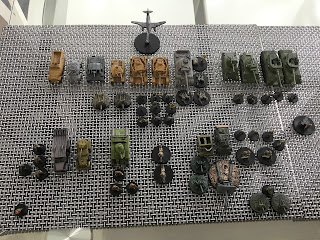 A smorgasbord of useful WW2 15mm kit courtesy of that all round good fellow, the legend that is Archduke Piccolo!

I have said it before and will say it again - wargamers can be the most generous of folks! That wargaming doyen, Bon vivant, wit and raconteur from the ‘Land of the Long White Cloud’ - Archduke Piccolo - was having a little bit of a tidy up when he happened to mention that he had some bits and pieces that were surplus to requirements from the old Axis and Allies Miniatures Game including not only a selection of 15mm vehicles but also the rules, game cards and the maps. To cut a long story short and following an exchange of emails the bits and bobs were duly packed up and sent on their several thousand mile journey to little old me - and  they arrived  safely this morning.

All I can say is Wow! There are sufficient vehicles (scaled at 15mm) for a couple of forces - primarily late war German and Western allied but with a couple of other bits from Russia, France, Japan, Poland and Italy.

The German force is the largest and as befits 1944 is a real grab bag of kit ranging from a Panther to a Goliath via some Pzr 4s and assorted other vehicles with a few infantry figures for good measure. The US have a selection of tanks and infantry whilst the British have anti tank guns (6 and 17 pdr), some infantry and a couple of recce vehicles. The others comprise a French tank (which could readily be repainted for the Germans in 1944), a Russian armoured car and a truck mounted Katyusha rocket battery (possibly repainted for the allies - did the US use truck amounted rocket artillery?) , a brace of Italian mortars, some Japanese anti tank guns and the ubiquitous ‘knee’ mortar and a sole Polish infantryman. Oh, and I forgot to mention the rather handy Me 262 jet fighter!

I have a modest selection of other Axis and Allies bits and pieces that I will add these to and so will have a reasonable selection of vehicles at the very least.

What I was really taken with though, and this was the unexpected part, was the four map sheets. These are a lot smaller than the versions I have and appear to have been made on rather more durable paper. Running out at 6 hexes by 8 (the hexes are 2” across the flat sides with a sheet being 10 1/2” x 16”) the map sheets are double sided so there are an impressive variety of terrain types to configure in a number of ways. I shall be getting these laminated in due course (like as soon as possible!) but what a superbly useful  selection of playing areas in a handy size - ideal for Portable Wargame style actions or small scale and more detailed affairs. They look something this: 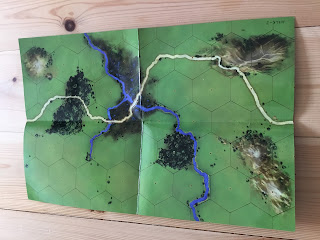 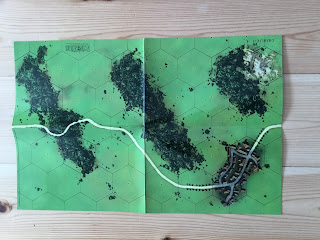 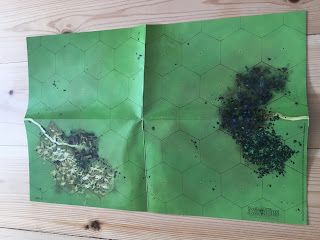 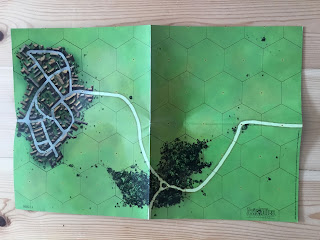 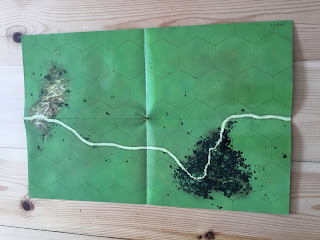 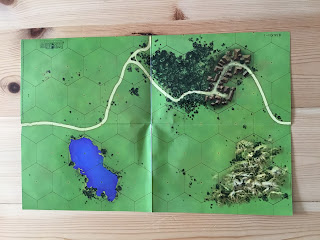 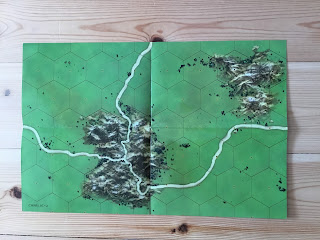 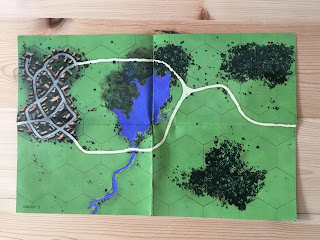 The maps and with apologies for the large creases - I suspect these have been lurking in a folded condition for quite some time - but these will be flattened out when laminated.

I am thinking that these maps will suit any number of periods and are ideal for a quick or small game when used individually. They can of course be combined in a huge number of combinations.

I can readily see me using these for 18th and 19th century games (imagi-nations perhaps?) as well as for WW1 and WW2. As for scale, well 15mm would be the go to but I am thinking that smaller may be a good option - even as far down at 3mm. For now though, and using the Axis and Allies stuff, I shall be sticking to WW2 - all I need to do is to get the rules organised and yes, I have a few ideas to play around with!

Once again many thanks to the good Archduke Piccolo - this may well be the catalyst for a whole raft of ideas!

The US did not use truck mounted rocket launchers.

We mounted our rocket launchers on tanks (T-34 Calliope and T-40 Whizzbang) because...tanks.

I had a feeling that was the case so thank you for confirming. I recall seeing the Calliope - the good old Sherman was a versatile piece of kit for sure ;-)

Very nice gesture by the Archduke!

What a great guft … and with what 15mm/1:100th-scale stuff you already have, you’ve got the basis of several useful small forces for PW, MEMOIR ‘44, or even MOBAT.

He is certainly a top chap - generous and hugely inventive with his gaming adventures!

Needless to say ideas are fermenting….

I now have a pretty good selection of bits and pieces and reckon that I can crank out a few good games - thanks to you and the Archduke!

BTW, MoMBAT is still one my ‘go to’ sets of rules!

A very generous gift! I have the basic map sets, and the Eastern front and desert sets as well and have found them useful for quick games with 1/285 micro armor and Axis and Allies board game pieces as well. I'm interested in the uses you come up with for them.

The good Archduke is a top fellow for sure! I have not seen the Eastern Front or desert map as although would be keen to get hold of them assuming I could get them cheaply enough. Like you I have an industrial quantity of the Axis and Allies strategic game bits and bobs which would be crying out to use. For the present though, it will be the larger Axis and Allies kit and the block armies.

The maps I have from Axis and Allies are twice the size of the ones that the Archduke sent me and are of a much thinner paper which is why I opted to laminate them. I also did the same for Axis and Allies: War at Sea which used offset squares rather than hexes.

I have a few ideas to experiment with but for now the ACW is calling once again….

David -
I'm glad these chappies have gone to a good home. As it happens, they cost me nothing so it was no hardship to pass them on to someone who could put them to good use. I admit to the temptation to keep the maps, but, on reflection, decided that you were likely to get more out of them, too, than I would!
Cheers,
Ion

There is a really nice selection of bits and bobs and so I now have a number of ideas to experiment with. First order of business will be to get the maps laminated - a single map fits nicely on my modelling tray - and I am looking forward to running some small games on them individually to start with.

I am pleased you did not succumb to the temptation to keep them!

They are indeed and very useful to boot. Using a single map section will enable me to fight a game on a tray on my lap - if that is not a Portable Wargame then I don't know what is!