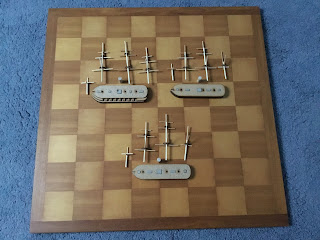 Component parts for each of the three ships. The two Union ships are at the top of the picture - the Frigate on the left and the sloop on the right - with the Confederate sloop at the bottom.

My new ‘modelling time’ regime appears to be working well. Essentially, during the week I am now able to spend early evenings - around half an hour or so - up in the man cave before relaxing with the Memsahib and Netflix or similar.

This evening my efforts were directed at the hulls and the deck fittings. These are quite basic and are usually limited to random hatch covers or gun mounts. I also now add a square to mount the funnel on - simply because it looks better than having the funnel merely stuck straight on the deck. Gun barrels are added right at the very end once the model has been assembled and painted.

The next step will be to seal the component parts prior to undercoating and painting. If I crack on I should be able to have these finished by the end of the week which will be a kind of milestone in a way as this will be the last of the fully rigged models for the project.

Let that sink in for a while….