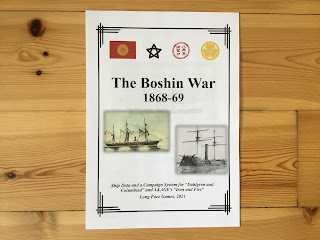 Now just what is this latest bout of insanity about? Another supplement from the indefatigable David Manley available from the Wargames Vault

Despite the inevitable Hollywood historical liberties taken with the 2003 film The Last Samurai starring Tom Cruise and Ken Watanabe, it was and remains a superbly entertaining and visually impressive film. From what I have worked out it seems like the film was a kind of fusion of elements from the earlier Boshin War and the later Satsuma rebellion. Be that as it may it was a cracking film!

My knowledge of the period is sketchy at best but it certainly appeals to the romantic in me - probably for all the wrong Hollywood inspired reasons! The idea of massed Samurai fighting in traditional style against a modern army has all the prerequisites of a game I would enjoy - mainly due to the asymmetric nature of the forces involved. Having said that the ‘rebels’ were not short of firepower per se although much of it was not quite premier league standard. As for fighting in full on Samurai regalia well lets just it looked great in the film…. For the earlier Boshin War there is also a naval dimension to consider which would not require much to either set up or to extend into the latter rebellion.

The land side would be in theory relatively straightforward to organise - especially if one was not too precious about historical accuracy. I actually think that just raising the forces a la The Last Samurai would give an entertaining game - almost Colonial like in many ways.

It is a period that I would like to learn more about so as to see exactly what history was lost from the film and who knows? Maybe something to go with the ships may be in order - and yes, there is a diabolically cunning plan afoot….

You probably know what is coming next….

….probably not quite in the way you envisaged it though….

The three ACW ships have been sealed prior to undercoating and painting. The former I will do tomorrow so the painting proper will commence on Thursday. Expect a review over the weekend!

There is a kind of plan in the offing here but as is usual with anything I dream up it inevitably has several interlocking parts to contend with - and if one does not come to pass then the whole ‘shuck and jive’ just collapses into ignominy….

Sengoku Wars? - go on, you know you want to!

I see the curse of autocorrect has struck - no Bosnians will be harmed in the planning of this particular flight of fancy!

Being inspired to tackle something based on a film of dubious accuracy but stonkingly entertaining all the same will probably condemn me to one of the more severe circles of hell and have the purist history buffs blowing several gaskets….

Seriously though, the ships look good fun in a modest and pocket sized project kind of way.

“Tranquility base, the butterfly has landed….!”