Making This Up As I Go…. 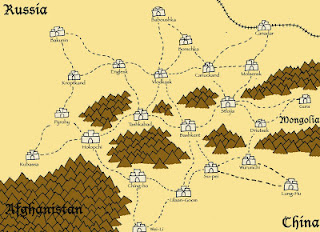 A very useful ‘Back of Beyond’ style map for a DBA 1500 - 1900 based campaign. The map appeared in Tim’s Miniature Wargaming Blog along with some other inspiring ideas for campaigns set in the region. It just needs an inland sea large enough for battleships to be perfect!

I had a very interesting and thought provoking conversation with Bob Cordery last weekend which was further enhanced by his recent blog post which you can read here.

The idea of ‘imagi-nations’ is something that has always been there or thereabouts throughout my gaming career and I have often dabbled with the concept albeit somewhat on the periphery. If truth be told I have often made some great plans for something imagi-nation based but invariably have never really followed through with any of my own ideas. The closest I ever got to gaming something ‘homegrown’ was the based on the North West Frontier of India and set in the fictional Roghan Valley and gamed some ten years ago. My plan at the time was to raise the forces in 54mm using Armies in Plastic figures and indeed, I even went as far as acquiring everything I needed. Sadly over time the idea withered on the vine and the figures have long since departed - they were last seen heading to Yorkshire - although I still managed to fight a game which appeared on the blog - Striking the Match - as one of the early encounters using my block armies.

This whole idea was very modest in scope and was literally confined to the valley itself. The troops were largely representative of a typical frontier defence force whilst the tribesmen were the usual mixture of assorted occasional friends or implacable enemies - usually depending on the value of the Imperial subsidies. It was relatively tongue in cheek in a Carry On Up The Khyber kind of way. As envisaged it would have led to a modest sized campaign featuring around half a dozen battles or so.

The terrain was based on a typical NW Frontier valley, the Imperial troops were fictitious as were the tribal types. In essence it was a kind of Hollywood ‘based upon’ style of set up. I think the initial idea was sound but the planned execution was a little on the ambitious side and besides - there was no naval dimension to speak of!

At no time have I taken the imagi-nation bull by the horns and created armies etc completely from scratch. I had plans to do this with two forces set during the latter years of the 18th century and inspired by Charge! And The Wargame and these went by the names of the Grand Duchy of Artois and the Electorate of Kronenbourg (the latter was founded in 1664). My plan was to have the Artois forces units named after wines whilst those of Kronenbourg were after beers. For the record I never quite sampled each of the namesakes of the intended units (I did give it a good go though!)!

Building something completely from scratch is quite an undertaking and requires a lot of work and dedication. Henry Hyde’s new tome on Wargames Campaigns touches on this in some detail and I have seen firsthand how Bob Cordery set up both his World of 1891 and more recently his La Belle Époque set up. Archduke Piccolo is also very active in this regard and so checking out either blog has been a continual source of inspiration for me. One must also tip one’s hat to Tony Bath’s Hyboria set up along with those of Henry Hyde and the late Charles Grant and on a more personal level, that of Eric Knowles’s Madasahatta.

For me personally I seem to prefer to ‘stand on the shoulders of giants’ and make use of existing fictional set ups. I have enjoyed many games using Bob Cordery’s Fezia and Rusland (from his world of 1891) and indeed, actually got as far as producing ships for both sides but that was it.

If I am honest then I would say that I am a little nervous at the idea of designing armies and navies completely from scratch - especially the uniforms and equipment etc - and would probably opt to use largely historical armies in fictional settings or rebadging actual armies into something else. Having said that my planned late 19th century Madasahatta style set up using 20mm plastics will involve a degree of artistic licence in a Hollywood ‘based upon’ approach. A good example of this is the British infantry as depicted in the film Zulu - they looked the part but there were sufficient historical holes to drive several buses through. The Battle of the Bulge and the tanks used is another example.

In many ways I feel at a kind of crossroads in respect of certain elements of my wargaming. I enjoy both historical and imagination based wargames but am leaning more and more towards the latter. Having said that old habits die hard and so my imagination based games will always have a degree of historicity attached to them - as is only fitting.

The most likely project for me in this regard will undoubtedly be the Madasahatta effort although I have something else in mind that is currently piquing my curiosity so to speak. I have this idea about extending the scope of the Roghan Valley to include elements of Central Asia - especially if I can fit in an inland sea (think the Caspian or even they Black Sea) - thereby allowing the Russians in (shades of the Great Game) with a Turkish interest as well. I am looking to acquire a copy of Eagle Games ACW game for the figures which will not only give me a couple of Portable Wargame sized armies for the War between the States but also some kepi wearing Russians. Not entirely accurate but close enough for my purposes and with an inland sea naturally the naval side will get a look in!

I have also been thinking about how to go down the Shogun book route and add European style troops to fight the figures from the boardgame of the same name. That would make for an interesting match up methinks.

As ever then, there much to think about and I am sure that ideas will be formed and discarded with monotonous and inevitable regularity!

For now though, I have just received my order of custom cut ship parts from Warbases so you know what that means….

I fancy that there is less of a line between historical and imaginations, but rather a merging or blending of the two.

The imaginations brings excellent scope for narrative and freshness in situations that give a sense of creativity as they take on a life of their own, but a visitor to your table might ask 'what battle is this then' as in truth in all practical terms it could be any one of several 'real' (historical) battles or part there-of.

I look forward to seeing where this takes you and where you take us!:-)

You are absolutely right about the whole ‘what battle is this then?’ I am absolutely sure that if anyone looks deeply at any fantasy style battles there is usually a historical background to a lesser or greater extent. I suppose for me that the problem I have always seemed to have is taking that leap of faith to go on full on imagi-nation which is probably ironic as one could argue that any wargame that is not a historical refight has an element of imagination built in.

As you rightly say there is less of a line - I would say that the line can veer between the two options depending on the inclination of the wargamer in question. Swinging both ways if you like!

All the best and thanks for the comment, very thought provoking!

Well I think your grande design has just the right combination of creativity, gaming opportunity and megalomania :-)

How about a few waterways to get some ACW-esque riverine action into the mix?

Their will definitely be some waterways featuring and for the very same reason you mentioned - not only that some river gunboats will also be fun to build!