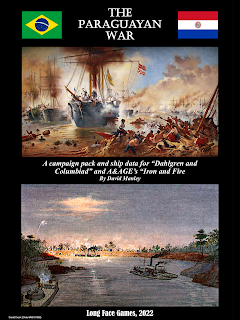 The War of the Triple Alliance - afloat

The indefatigable David Manley has done it again! Another campaign style supplement for his Dahlgren and Colombiad and Iron and Fire rules available from the Wargames Vault. This has been a long time in the making - over ten years in fact - but in my opinion it has certainly been worth the wait.

The supplement includes a brief history of the war, a campaign system including maps and counters representing the major ships and shore batteries, an overview of the models available (Mr Manley has also prepared some files for the 3D printing fraternity) and full specifications for both Dahlgren and Colombiad and Iron and Fire.

In many ways the war along the rivers had a number of similarities with that fought along the Mississippi during the American Civil War, indeed, the main Paraguayan fortress at Humaita was compared with Vicksburg although better defended from the land side due to the extensive swamps.

The tide turned in many ways when the Paraguayans were unable to pay for some British built ironclads due to their economy crashing - instead Brazil brought them!

So what does this mean for me?

What indeed! I would like to tackle this as a project at some point but for now it will have to be filed under ‘pending’. On the face of it the whole set up appears to be a little too similar to what I have for the ACW on the rivers although once I have read about it I am sure that opinion will change.

Definitely one to do at some point and my congratulations to David Manley for producing such a top quality ‘oven ready’ supplement.

How long my resolve will last is however, a moot point….

David -
That reminds me of a kind of Imagi-Nations project I had in mind that never got off the ground. It was in effect the ACW set in South America, fought between the the United States of Anaconda (USA) against the secessionist Confederated States of Amazonia (CSA).

The idea here is that one might combine the events of the ACW itself, the Paraguayan War, and possibly the Nigerian War of the 1960s. One can then use the vessels built for the ACW at least.
Cheers,
Ion

That sounds like a lot fun for sure! I was looking at some of the ships and boy oh boy would they be easy to make or what? I would not used the ACW collection for the simple reason they all have flags.

I already have the flags I need for the War in the Pacific so would another South American naval war really be necessary?

A very interesting period David…and certainly doable… size wise.
You could always tie it in with the land campaign using your ‘blocks’

There is a huge amount of potential with this from a naval perspective - especially if you indulge in that perennial standby of the discerning wargamer: What If?

From an MDF perspective it would not need a lot of work and as you rightly say, the land side could easily be tackled using my block armies.