As mentioned earlier in the week yesterday saw SWMBO's brother and myself head up the M11 to Duxford for the day - and what an excellent visit it was! Despite spending the best part of the day there we still did not manage to see everything (we had to miss out the 1940 Ops Room and the entire Air/Sea hall  - so sadly no chance to stroke the Tirpitz....) but we had a great time anyway. The place is huge - I had forgotten just how big - and is continually evolving in respect of the collections housed there. A good example of this is the Airborne Assault display located in the Air/Space hanger, tucked in behind the Lancaster bomber. The collection was moved from the now closed down Airborne forces museum in Aldershot and it turns out that a good chunk is still in storage so this will expand in time.

As an ex- paratrooper SWMBO's brother naturally wanted to see this first and so despite the small size of the display we manged to spend over an hour looking at the selection of Airborne memorabilia - from their early days up to modern day Afghanistan. The medals collection is very impressive with numerous VC's on display - both from WW2 up to the Falklands conflict. I was particularly taken with the uniforms and decorations of Col. John Frost of 2 Para at Arnhem Bridge fame - the display even included his famous hunting horn. 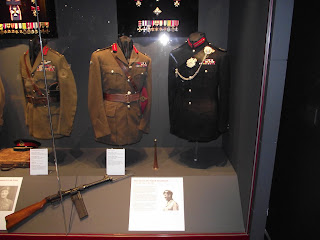 Colonel John Frost's uniforms and the famous hunting horn
There was also a display of items from both the Radfan and Aden campaigns which was of particular interest as SWMBO's brother saw action there. One of the items on display was a shattered flash eliminator from the end of an SLR. SWMBO's brother was in the firing line alongside the lucky recipient of this souvenir when it happened - I say lucky because a millimetre either side and the chap in question would not be here today (he still is). 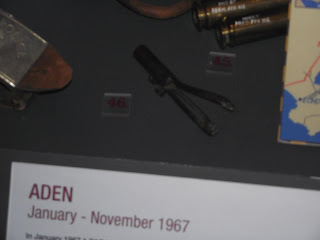 The lucky flash eliminator....
A number of ex servicemen serve as volunteers at the museum and on duty in the museum were a couple of ex-paratroopers and so, no doubt attracted by SWMBO's brothers rather distinctive tee-shirt soon introduced themselves and the three of them were soon swapping stories as only ex-servicemen can. It was quite amusing to listen to paratrooping anecdotes although as to me it felt almost like I was intruding at a family gathering! 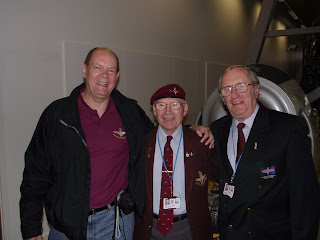 Three ex-Paras (SWMBO's brother on the left)
After making our way from the Airborne Assault display we then went to explore the rest of the museum - starting with the Air/Space hall. For the most part many of the exhibits will be familiar to most wargamers with an interest in WW1 and 2 and so I shall confine myself to those oddities or items of particular personal interest starting with the Avro Anson. 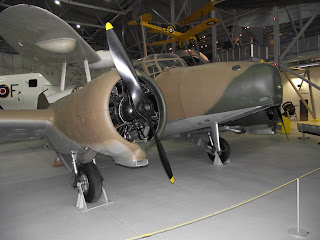 The little known Avro Anson gunship variant....
Unfortunately I could not get the shot showing why this was of particular interest. The Anson was a trainer/liaison/light transport type and so why was this example mounting no less than 6 air-cooled Lewis guns? I don't know if this aircraft was used for air-gunner training so I am puzzled as to why it was carrying so much hardware.

Our next port of call was the land warfare display and some old friends made an appearance in the shape of the (in)famous Tiger tank - seen here located snugly in a shop front, no doubt awaiting the opportunity to inflict some damage on the assorted enemy hardware on display in the immediate vicinity (mainly Russian). 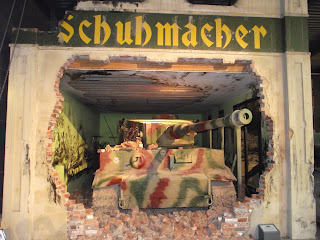 Tiger, tiger turning right...(left actually but right didn't fit as well!)
Of the immediate opposition to the above the Russians were most noticeable: 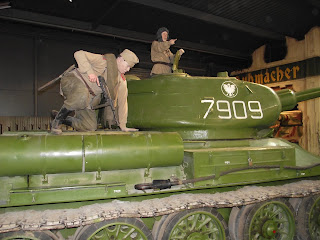 "Ourrah Pobieda!"
There was an rich and varied assortment of vehicles of which the following were my particular favourites: 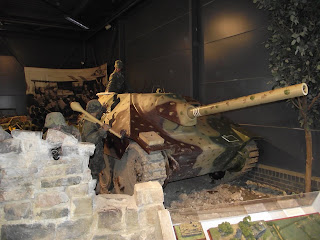 The Hetzer tank destroyer and friends. 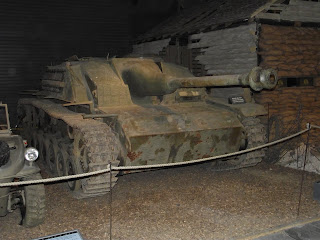 A rather shabby looking Stug 111 - although it is going to be spruced up at some point. 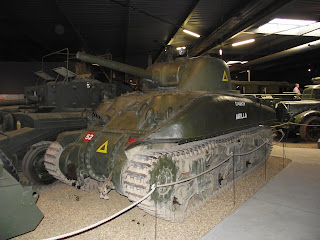 The Canadian Sherman - the Grizzly 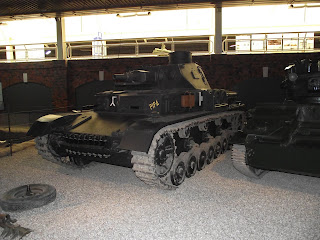 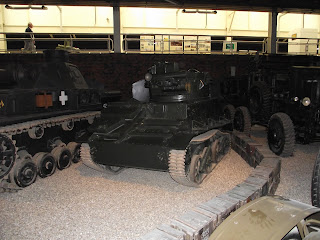 A Vickers Light tank - and yes, it is that small!
I have a few more shots from the Land Warfare hall which will be included in the final part of this post which I hope to tackle this evening. After we had finished up in there we headed to the US air hall and finished up in the Battle of Britain display and they will form the contents of part 2.
Posted by David Crook at 06:05

Just how unlucky was Johnny Frost, anyway? Before being left hanging on the vine at Arnhem, Monty had done the same thing to him at Primosole Bridge (IIRC) in Sicily! Deja vu all over again. From what I've read, though, he never suffered a "1" on his morale rolls...

I am sure that Monty would have described as part of the plan in any event!