Mesudiye after her extensive rebuild - hard to believe it was the same ship!
The Turkish navy that I am modelling that of Fezia on was of a reasonable size compared to the Black Sea Russian fleet. The two problems it faced though were that the ships were old and that the navy as a whole was woefully inefficient in terms of training and maintenance.  The Ottoman treasury was perennially empty and so vessels quite often virtually rotted away due to lack of routine care and attention. It was almost as though the naval mindset had been so fixed with the relative longevity of the old wooden Men of War that the new and far more complex steam vessels were accorded the same level of apathy!

Aside form this neglect though, the Turks used an impressive number of ships - it was just that they always seemed to be a generation behind the rest of the world. The Turks had been caught up in the ironclad building frenzy of the 1860s as much as any nation and her navy was impressive looking by the mid 1870s in terms of sheer weight of numbers. In fact, the Turkish navy had offered to support Austria in 1866 against the Prussians - one wonders what the ghosts of Prince Eugen and Don John of Austria would have made of that! Interestingly, the usual Turkish financial woes meant that a number of navies often had the odd ship in their order of battle that had been ordered by the Ottomans but that was unable to be paid for or impacted by political implications - HMS Belleisle and her sister ship HMS Orion (actually Turkish designed) and also HMS Superb; all acquired by the RN due to the situation with Russia in 1877/78. HMS Superb was the sister ship to the Mesudiye and at the time of their construction (in the mid 1870s) they were considered to be amongst the most powerful warships afloat. 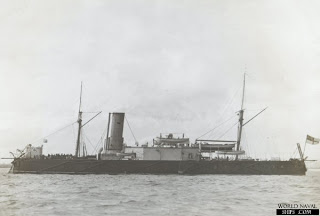 HMS Belleisle under the RN flag - the central battery of this ram can clearly be seen
The bulk of the Turkish battle line consisted of broadside and central battery ironclads of various sizes and vintage (and often rebuilt and modernised to a greater or lesser extent) and so the Fezian fleet will follow suit. This will make for an interesting match up against the more modern Rusland ships although they of course will be generally be fewer in number.

Alongside this veritable floating naval museum the Turks also employed some of the small torpedo boats described in part one and so the resultant fleet will have an even greater selection (or even disparity!) of the old and the new when I build it.

Of course there are implications for the Portable Naval wargame rules with all this as whilst they are designed to cover pre dreadnought type ships much of what will be in use will in effect be 'pre' pre dreadnought and so I will need to factor this in in some fashion.

As ever though, this will be enormous fun to undertake and I am looking forward to doing just that.
Posted by David Crook at 05:58

I sometimes wonder what the Royal navy might have looked like if they had 'modernised' their old ironclads in the same way as the Turks did.

One can only imagine - or build them into an 'imagi-navy' perhaps!

I think the Turks took the view that it was cheaper to refurbish an old ship than to buy a new one. Certainly the parlous state of the Ottoman finances would make that a better option.