Maps and Troop Blocks - Sooner Rather than Later! 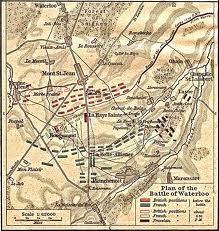 Waterloo 1815 - One of my favourite campaigns of all time
Today has been a day of much tidying and sorting things out on the domestic front - renewing various insurances and checking quotes etc - not difficult but time consuming and frankly quite tedious although we have saved a packet from next years various bills (thinks: money saved equals more toys, or not, if SWMBO has anything to do with it!).

I have moved some additional material from my den in the loft into my downstairs 'ready rack' in preparation for a few painting jobs so am now set fair for various tasks. I did make a rather helpful (re)discovery whilst pottering about in the loft though. I have a set of the paper maps for the Axis and Allies collectible WW2 miniatures game - as well as the additional maps from the advanced rules. These are double sided and geomorphic and when I acquired these I took the precaution of having them laminated. There are printed with a fairly generic looking European style countryside terrain (no Sudan or North West Frontier here!) of small rural villages, woods, tracks and streams and the odd pond and hill. When deployed side by side the number of hexes comes out at 10 by 18 and the hexes are 3" across the flats.

I have a number of tactical hex based games based on the Commsnd and Colours system - Memoir 44/Battle Cry/Napoleonics etc - but these have hexes that OK for 15 and 20mm but not so good for any larger. They are also too small for one of my blocks to fit. The Axis and Allies maps will solve this at a stroke as they are large enough to fit a couple of blocks on with no trouble at all.

As I am still in the process of acquiring the appropriate terrain for my Hexon collection (I own the base flocked green set and the sea blue version) having these maps available is really handy for gaming purposes. I can use the blocks comfortably on these without having to worry about setting up the terrain etc. Obviously this is a short term solution but certainly going forward it will be handy to have in reserve.

In the meantime though, it means that my first block based battles can be fought sooner rather than later.
Posted by David Crook at 20:43