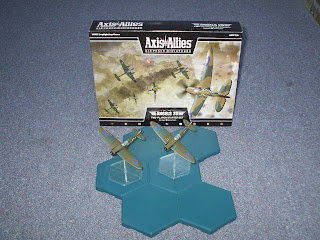 In between looking for another job, a DIY list of Biblical proportions, offloading my entire 1/3000th collection, messing about with pieces of wood for my 'Universal Warship' idea, acquiring paints for the North West Frontier and catching up on a lot of reading I have been and gone and done something rather rash....

On the back of a very good initial game at the club a couple of weeks back I have taken the plunge and acquired a starter set and a couple of singles for the new Axis and Allies: Angels 20 WW2 aerial combat game.  It is really good fun to play (the game last night especially so!) straight out of the box and indeed, should you wish to do so that would be fine but for me I will need to spend a little time on the models - purely for my own benefit. The aircraft are scaled at 1:100th and whilst the initial release covers 31 fighters or variants there is only a single two man mount - the German Bf 110. There are Spitfire Mk 1s, Hurricanes and Bf 109s so the Battle of Britain is covered rather well and for me that will suffice for the time being. The one thing I will do though will be to give the models  a fresh coat of paint as some of the schemes are a little unusual to say the least - the overall dark grey Bf 109 being a case in point. Being a gamer of the Airfix generation I can safely say that the Battle of Britain has long held a fascination for me and so gaming this using models at this kind of level (roughly a flight of 4 aircraft) has a charm all of its own and in truth, I have played a lot of WW2 aerial board games over the years - this is pretty much a board game with models after all. I will see about sourcing some decals for the models just to give them a little more of the 'wow' factor. 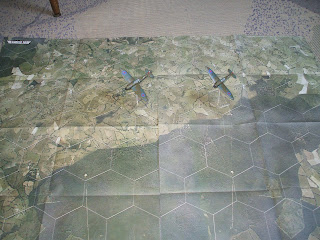 The map sheets provided are paper and give a playing area of roughly 9 by 7 hexes which is way too small in my book - we played at the club last night on my Hexon on a 12 by 10 area which was okay for the six aircraft in use - and I cannot see me using them. The game counters are printed on card which is only slighter thicker than paper and so these will be replaced with something a little sturdier. The models are mounted on flying base with a ball and socket type head which means that the aircraft attitude can be accurately represented. The clear plastic hexagonal base is inscribed with numbers 1 to 6 for altitude purposes which can be inked or painted in for clarity (Mr Fox did this with his and very nice they look as well). 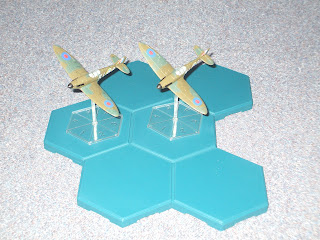 Sighing for a Merlin - "Stick to me like glue Simon!"

Game play is very straightforward and the combat system will be familiar to anybody that has played any of the Axis and Allies miniatures games. Essentially you roll a number of d6 depending on the range, apply any applicable modifiers and need to equal or better the 'armour' or 'vital armour' score of the target to score damage in the case of the first or destroy in the case of the second. The effects of deflection when shooting are taken into consideration which again, adds to the feel of the game.The usual aerobatics so beloved of most aerial gamers are all present and correct and require a successful dice roll using the aircraft ability as a modifier (together with any pilot ability). Initially I was a little uncertain about this but having played the game a couple of times; coupled with some reading on the subject I am now convinced that it adds to the flavour - I suppose a failure could be put down to hesitation on the part of the pilot or perhaps a distraction of some kind - bear in mind the high speed nature of a WW2 aerial dogfight - even during the early years of the war.

I like the initiative approach and so planes moves alternatively but the player moving first also gets to fire first  and damage takes effect immediately.

Bombers are represented by tokens (I have no idea if plans are afoot to produce any at some point) and in truth are pretty much just targets as this is designed to be primarily a fighter game. There are also rules for flak, clouds, night fighting and ground control as well as a conversion table for using the models with the Axis and Allies land based game.

So what does it mean for me then? Well, as mentioned I have a long association with anything Battle of Britain related and for WW2 aerial games in general so I guess this was a no-brainer in some respects. It will be nice to paint the models as I have not touched an aircraft kit for years and given that the numbers I shall be using initially are quite small this should not be too onerous - and that is coming from someone who has a pathological dislike of painting!

I have many sets of hex based aerial rules knocking around and so the longevity of this mini project is assured. I do not ever envisage using more than a dozen models on the table at any one time so the numbers will be kept to a reasonable level - my Battle of Britain set up will be 14 models in total - and going forward I could dip into other theatres on a flight of four aircraft as the basis for the set up.

This is certainly not a new period for me - just a variation on a board game theme.
Posted by David Crook at 17:50

I can only view this as a dangerous new addiction I shall be vary ... Looks a peach though ... Firmly sticking to 1/144 scale though

Nice write-up Dave. Had a chance to play last Tuesday. Lots of fun. As you say the game has a good feel. I thought the models looked good. My friend wants to marry the system to Zvesda's, Operation Barbarossa. Should be fun, gives him an excuse to buy more planes.

Great write up. This is my new addiction. Enjoying painting the BF109 wing man planes into Med versions.

Against all the odds I'm quite tempted!

Very cool.. I could see myself getting both myself and others from my gaming group into something like this. Plus low initial cost is a huge benefit also :) Thanks for this post!

The models are Ok but not as detailed as 1/144th - they are gaming pieces first and foremost - but they are hard plastic, readily assembled and painted which has an attraction all of its own although I will be repainting mine.

The only problem I can foresee is the shortage of decals in 1/100th for aircraft.

The rules are great fun to use and as Mr Fox rightly observed they have the makings of a club night classic.

The funny thing with this set up is for me the limits to the numbers of models available and the amount you can fit on a table is a positive advantage as I can 'get into' the game as little or as large as I want to.

Glad you enjoyed it!

I would love to see some pictures of the Bf 109s when ready - I am already planning my own painting campaign and that particular model is first under the brush for sure!

PS Loved the maps on the link you sent - that is the way to do it for sure!

Go on - you know you want to but I reckon you will also want to give the planes a paint job so be warned!

It is a good game and thus will offend the rivet counters no end!

No problem sir! It is great fun to play and can be done very well at a relatively low cost.

I am really keen to slap some paint on the models as even a little touching up would make a heap of difference.

I saw this being played at CANCON in Jan and it looked like fast, furious fun!

Thinking beyond the obvious - Bag the Hun looks like it may well be dusted off!

Great write up and I'm very tempeted! I too have 1/144th scale aircraft with my 15mm armor but after checking the price, this looks very doable!

The range is quite varied and with more to follow at some point a WW2 gamer should be able to cover most theatres adequately. 1/144th scale may be a good one to use for multi engined bombers so they do not take up too much table space.

The rules have really hit the sweet spot in my opinion - that careful balance of game play and the all important 'flavour' of the period.

Chocks away I say!