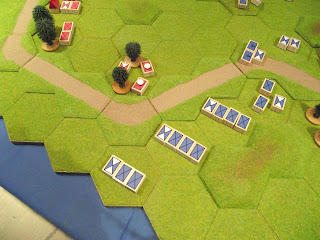 Columns of Blue infantry prepare to assault the Red position - note the 'loose' formation of either sides light infantry and the deployed artillery.

After the dust had settled I revisited my notes on the recent game and duly pondered several points arising. As mentioned I used Bob Cordery's 'Memoir of Battle' rules which are based on the Command and Colours system of Richard Borg with a dash of Morschauser thrown in for good measure. They work absolutely fine although I need to ensure some 'block-centric' points are incorporated. More of these later but my first thought concerns initiative.

As the rules are written the first phase in a game turn is the artillery fire phase. This is simultaneous and any damage inflicted takes effect before either side has their game turn. It makes for an interesting game mechanic and is certainly something I am going to keep. I mentioned initiative intentionally as this phase comes after artillery fire. In most sets of rules I have used where initiative features it usually does so at the start of a game turn. With this in mind I intend to try the rules with the first two phases swapped around so the the revised order of a game turn is now  - initiative - artillery fire - player one - player 2. For me this would appear to make a more ordered game turn sequence (more strictly perhaps, a more familiar game turn sequence). If this feels better then of course I will need to tinker with the naval version - Memoir of Battle at Sea; the infamous MoBaS. The great beauty of this game system in any event is that I believe such changes are able to be incorporated with the minimum of disruption. I will try this next time out and see what happens.

Using the blocks raised a number of issues that I need to consider. Firstly, in effect these represented individual figures with a typical line infantry unit consisting of four such blocks, cavalry with three and artillery with two. By careful positioning of the blocks within a hex a bonus is gained in that formations can actually be represented. This was more by chance than design but it does have implications for movement, combat and facing.

Regular troops must have their constituent blocks touching whilst deployed light infantry or most irregular troops can have their blocks loosely distributed around the hex. It is also possible to represent columns and even squares if needs be, simply be careful arrangement within the hex. I shall draw up some permitted formations as examples and will hopefully be able to illustrate these in due course.

I will still be making use of a roster for my games - if only to add some soul to the army being represented - and will be making some movement trays with a magnetic strip system for use in unit identification purposes. The roster will also be used for aiding with the calculation of army level exhaustion points, as well as recording the quality status of the units being used.

All in all then it can be seen that as usual my well developed desire to tinker with a perfectly good rule set has surfaced once again - I only hope that it is for the right reasons and not some misplaced moment of whimsy!
Posted by David Crook at 06:40