..The 197th anniversary of the Battle of Waterloo. 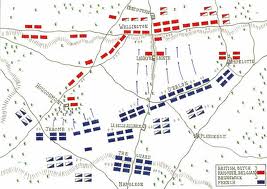 No prizes for guessing the battle featured above - note the use of blocks to indicate troop positions - that seems I like a good idea and I wonder if anybody has ever thought of doing that?

Today see the anniversary of one of the most important battles in history - that of Waterloo, 1815. The final defeat of Napoleon at the hands of the Anglo-Dutch and Prussian armies in Belgium needs no introduction from me as the number of books on the battle must run into the thousands and so it can be very easily researched. For me the battle and campaign has held an almost mystical attraction going back to the early 1970s and my very first tentative forays into the world of the war game via the range of Airfix 20mm plastic figures. In many ways the campaign captures in the three days the entire sweep of the Napoleonic wars and could be likened almost to a Greek tragedy with the inevitability of the ultimate defeat of the main protagonist after his spectacular rise to glory.

Generalship of the highest and lowest order; gallant but occasionally futile sacrifice; heroism rubbing shoulders with craven cowardice; uniforms and soldiery of a bewildering variety together with columns, lines and squares and the thunder of charging cavalry all cast their spell over the gamer and I for one have never been able to ignore the attraction!

Coincidentally as I write, it is pouring down with rain and if you have ever read David Howarth's Book - A Near Run Thing you will appreciate the opening paragraph with the weather in the UK as it currently is....;-)
Posted by David Crook at 06:31

Watching a doco on it with the Lad tonight! BTW the Battlefield is a fantastic visit and walk - a must see and do!

"No prizes for guessing the battle featured above"

Good job - I wouldn't have recognised it :)

(I always regard the Napoleonic era as lots of armies in pointlessly complicated uniforms parading around Europe in order to provide a backdrop for various interesting naval campaigns :) )

You inspired me to dig out some pics of my visit David!

Not to mention today being the 200th anniversary of the declaration or war by the US.

I hope the lad was suitably impressed and the pics look good! I plan to go over there myself at some point.

Napoleonics (on land) are a feast for the senses; a smorgasbord of uniforms, battles, characters and sheer historical in your face-ness!

The sea part is also as good!

Very true and I can't believe I missed it!