Volley and Bayonet using a Hex

I have not been able to get much done this weekend of a practical nature (painting or modelling) but I have been able to spend some time giving some thought as to how best I can convert Volley and Bayonet into a hex based system for use with my Hexon collection. It is early days with this but I have come up with an idea that may be worth considering and so I shall explore the following further. 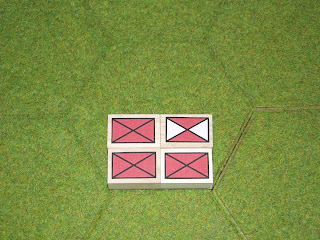 (A) A 4 strength point infantry brigade deployed at the rear of the hex with the area in front representing 2 increments.

Essentially I am going to 'open up' a hex tile. A Hexon tile is 4" across the flat sides and measurements for Volley and Bayonet are in inches. All I am going to do is to convert the actual ranges and distances into increments or measurement points with a single Hexon tile having 4 such increments. How to orientate the unit within a hex is the complication but my current thinking is to assume that a unit occupies two such increments. If the unit is positioned along the back edge of the hex it has, in effect, 2 increments in front of it or, if you like, 2". I should point out that maximum range for a smooth bore musket is 2" so you can see why I am thinking along these lines as otherwise using any ranges etc under 4" would be impractical. You simply would not be able to call a whole hex as range one as it would serve to swallow up all the distances and ranges in less than the nominal size of a hex. Coming back to our sample unit should it be deployed in the centre of the hex then it would be assumed to have 1 increment of range/distance all around it. A unit deployed along the leading edge would have no increments in front of it but would then have 2 increments to its rear. 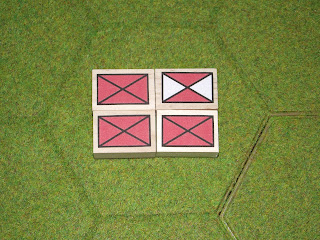 (B) The same brigade deployed in the centre of the hex with, in effect, a single increment all around it.

As far as ranges and move distances are this now becomes very simple to 'measure' as all that needs to be dealt with carefully is the units positioning within the hex. Flanks and rear arcs should be equally straightforward to adjudicate, again bearing in mind the units relative position within the hex and the fact that we are now dealing with 60 degree angles rather than 45s and 90s. 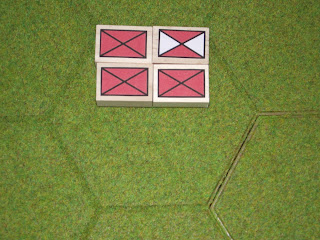 (C) Finally, the brigade is at the 'top' of the hex - with a 2 increment zone to its rear.

Obviously I will need to consider relative increments depending on where an attack is coming from - I have a few thoughts around this but need to tidy them up a little and so will report on them when I have! 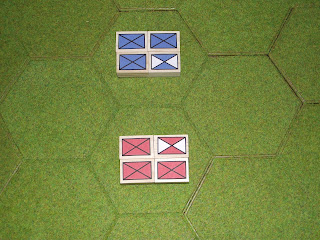 (D) The two opposing brigades are centrally deployed and so would count as being at a range of 2 increments - which is maximum range for a smooth bore musket. 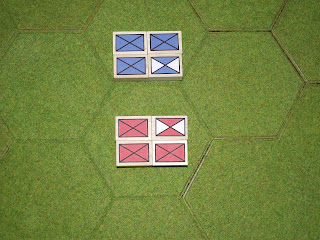 (E) The same brigades closing the range - this time it is down to a single increment. 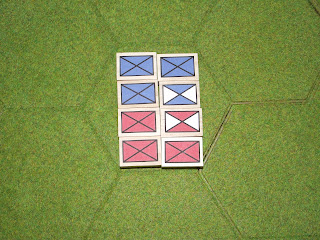 I have a number of other considerations to factor into this and I guess that in effect I am attempting a board/table top war game hybrid of some kind. Once this idea has been bedded down the rest of the rules should work as they written - that is my intention anyway - and the use of the hex will then not be such a handicap compared to using a free table.

As usual, any comments and observations would be much appreciated!
Posted by David Crook at 19:03

Based on my experience with adapting several sets to hexes, it is madness working with partial hexes. In no time at all, nearly all the advantages of the grid are gone and the game becomes harder and more complicated to play than just ignoring the hexes and measuring.

Picture 2 remaining blocks in a hex, at the center line or maybe on the rear line and an enemy artillery unit several hexes away firing at a maximum angle trying to figure out if the target is just in or just out and so on.

If I were to adapt V&B for my own uses, I would rule 1 unit per hex except during melee, make musket range 1 hex, rifles 2 and for melee require a move over the line into contact. Rather than then doubling all other ranges, I would just live with the discrepancy figuring that the relative ranges would hold and ranges would still be less than a

But that's just based on our experience. I anticipate much happy tinkering for you over the next weeks! :)

I certainly would not consider partial hexes to be an ideal solution but it one I will give an airing to. the problem as I see it is that it will become quite clunky in the heat of the action - your alternative seems a lot cleaner.

I will try both methods and see how it pans out although my idea will need a lot more tinkering compared to yours initially.