A Perfect Piece of Timing.... 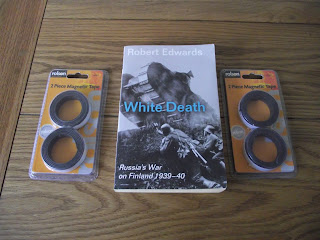 Back in the boot sale groove....

The weather today has been glorious and so as is our invariable custom during the summer months, SWMBO and I attended a local boot sale this morning.

I was very glad we did!

I mentioned in my previous post that I was going to base my Chaco War collection on Megablitz style bases which have a small magnetic square on the base for use with the strength markers. I had some of the strip but it had been used up on various ship bases over the years. I was delighted therefore, to find a chap that sold me the two packs you see in the picture (total length being 152 cm) for the princely sum of a pound. That was a good start to the day and no mistake.

I then followed this up with the paperback you see above at a cost of a mere 50p. The Winter War is something that I know very little about other than the fact that the Russians were comprehensively outfought and prevailed eventually due to sheer weight of numbers - at least that has been the thrust of the comments I have read in some of the popular histories. What has piqued my interest in this war is the fact that the Finns managed to get a number of 'aces' flying both MS 406s and Brewster Buffaloes - which in terms of the Axis and Allies aerial game is quite a feat as they are not the greatest examples of single fighters ever built.

I have absolutely no intention of gaming this war - there is far too much snow for my taste - but I am interested in the effect it had of the Russians prior to the German invasion.

In closing I have managed to source the trucks I need for the Chaco War and I have ordered another couple of artillery pieces from Irregular just to finish off the collection.

Meanwhile, back to the marathon Borgias series 2 watching.....;-)