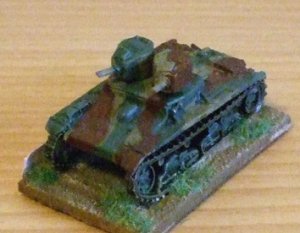 The QRF Vickers 6 ton tank, Mark A with the left handed machine guns....

I readily admit to being rather embarrassed by this. During the Chaco War Bolivia had the services of three Vickers 6 ton tanks - one of which was the twin-turreted mark A version. As an aside, Turkey also made use of this mark, fielding sixteen of them. I wanted one in 15mm for use with the Bolivian army and so was pointed in the direction of QRF by Bob Cordery as a potential supplier. Lo and behold, I saw one and ordered it, and it arrived yesterday.

The white metal model comprises but 5 pieces - the hull, the track sections and the two turrets and it was the latter that caused my embarrassment. The turrets are built so that the machine gun is offset to the left when viewed from behind. Both turrets were identical and I got into my head that this was in fact wrong - surely there should be both a left and a right handed turret? After carried out a quick check on Google and could not get a clear idea - at least not from the images I could see. I even fired off an email to QRF querying this - it looked plain wrong in my opinion. Imagine my surprise then, when I discovered, via a more intensive search of the net that....

....Both turrets are, in effect, left handed!

I felt rather foolish about my mistake (I had not really checked in sufficient detail) and so offer a public and shamefaced apology to Geoff at QRF for doubting the accuracy of the model (which I should point out is a lovely casting) but, in my defence, opening the package came at the end of a very long day and so my concentration was perhaps not quite as sharp as it should have been....;-)
Posted by David Crook at 06:23

I had a similar feeling building a 28mm A-9. It's two forward MG turrets have the same offset as the Vickers. I thought surely there would be right/left versions, but no.

Nice model, the QRF stuff is very nice although I have never bought any myself.

I did feel rather foolish I must admit!

It is a very neat little model and I am looking forward to assembling and painting it.

I am still blushing at the thought of it!