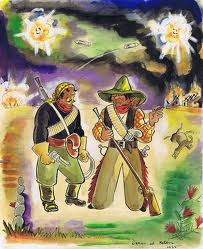 A political cartoon of the Chaco War

This may come as a complete surprise to some but is more likely as seen as being yet another example of my taste for the unusual when it comes to wargames. My present to myself for being back in the land of the employed was a pair of 15mm Irregular Miniatures armies for the Chaco War in South America between Paraguay and Bolivia from 1932 to 1935. I have all the figures I need and all that is missing is some trucks (I shall use Zveda Zis 5 trucks for both sides - not entirely accurate but close enough to the American Ford that was in use as to make no difference) and perhaps a coupe of aircraft from Shapeways.

The radical step I shall be taking with this collection is that I intend basing the models for use with Tim Gow's Megablitz rules - which means for infantry a pair of figures on a 40mm square base with a magnetic strip for recording losses. This will also mean that they will be usable for either the Memoir or Portable series of rules by Bob Cordery. It also means the number of figures needed is relatively small.

The collection consists of around 50 infantry, a dozen cavalry with dismounts, an assortment of artillery - field guns, mountain guns and the odd heavy howitzer - and the inevitable HMGs and mortars. Bolivia also has the use of a Vickers 6 ton tank, courtesy of QRF.

As it stands at the moment the only book I own on the subject is the Osprey title (and very good it is as well)  but this lack will be rectified fairly soon - and a post will follow as a result.

This is 100% an 'Oooh Shiny' project and I must confess that up until the end of last year this war had never even featured on my project radar - in fact to my shame and embarrassment I had not even heard of it!

The conflict is a very self contained one and so what I currently have will suffice entirely for my gaming needs in this theatre.

Of the Irregular Miniatures figures I will say only this - the Paraguayans are very nice indeed in a simple way and so are the Bolivians but the latter are quite 'flashy' and so will need some attention prior to painting. The paint jobs will be simple enough, even for me, and at the moment the only difficulty I can foresee concerns suitable terrain. I am looking long and hard at the 'desert transition' Hexon tiles as being suitable to represent the semi-arid terrain of the Chaco but that will something to finance at a later date.

In closing I should extend my thanks to Bob Cordery - simply because it wasn't for his interst in this war I would probably have still not heard of it....;-)
Posted by David Crook at 00:17

It's a conflict I'd like to do too. The Irregular range and an Osprey just makes it that little bit more tempting :)

A wise choice for a new 'period! ... even thought have a vested interest! I look forward to seeing your painted army's.

I have been working on a new draft of my PORTABLE WARGAME rules that will allow the rules to be used with both single-based figures or multi-figure unit bases. I hope to send them to you once they are finished ... and once my stomach bug/virus has gone.

Bob Cordery has produced a DBA/HOTT variant for the Chaco Wars which are available via his blog - they look great fun and he has even produced some unit counters to try them out with!

I am really excited about this project and hope to kick off the painting asap.

I hope you are feeling better soon and will be recovered enough for Broadside.

I am really excited about this project and am really keen to see the new draft of PW when ready - I assume these will have the fruits of much thought applied to them from during your recent cruises.