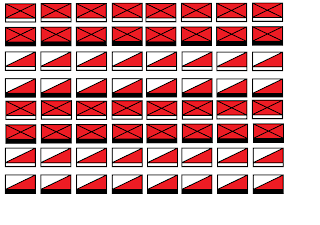 The new labels - note the black and white trim.


Since my last post I have been messing about with designs for the additional troop types I wanted to make available for my block armies. The main criteria was that the design needed to be visible on the table top. It also needed to be simple to produce and in keeping with the existing designs. The symbols I have used are mainly based on standard NATO map symbols although the commander block is derived from the maps that feature in David Chandler's book - The Campaigns of Napoleon.

I considered a number of ideas but eventually settled on the technique you see above - the use of plain black or white bars across the bottom edge of the symbol. Aside from using this idea with infantry and cavalry - for grenadiers, light infantry and varying cavalry 'weights' - there is no reason why I should not use the same method for varying artillery types and even modern equipment - tanks and similar. Initially I was only going to tackle the red, green and blue armies but have decided to extend the scope to include all the colours I possess. Luckily I have more than sufficient Jenga blocks cut in two to be able to do this.

I am planning on labeling the blocks over the next day or two and will be sure to post some pictures when they are ready.
Posted by David Crook at 16:51