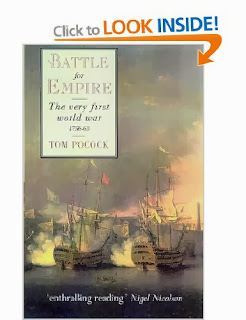 
Over the years I have taken part in some truly epic 18th century battles set, for the most part, in the period of the Seven Year War. I even flirted briefly with the idea of producing a Swedish army to fight against the various other forces that had been raised - Prussians, French, Austrians, British and others. Back in the day the rules of choice were either Charge! (using half sized units) or Frederick the Great. The one thing that I never tackled though was the naval side.

I am probably even further away from painting an army for this era but I do have the material needed to tackle some of the naval side in the shape of the 150-odd Pirate Ships from the Pirates of the Crimson Coast game. Aside from the naval side I have also found myself drawn to the fighting across the far flung cornets of the globe - namely against the French in America and India and the Spanish in the Caribbean and the Philippines. Lacking any meaningful reference for this era I managed to pick up a copy of the book you see above - and what a cracking title it is as well. It is probably not the most detailed account you will ever read but as a primer and a source of inspiration it ticks an awful lot of boxes. It would be a simple matter of using the blocks for the land actions and the ships for the naval side so the potential for something a little bit different is certainly there - in fact on this basis I have absolutely no reason to not give this some serious consideration as everything needed is to hand.

One to consider in a little more detail methinks.
Posted by David Crook at 19:50