Young Winston and the NW Frontier 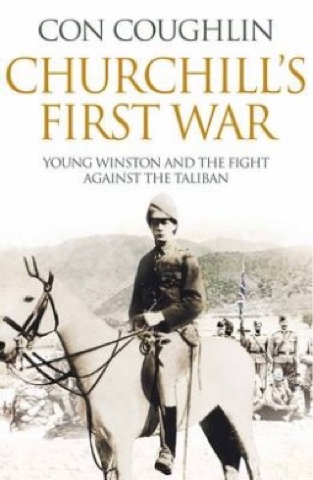 Young Winston - and with no sign of a broom handled Mauser (that came later!)
I picked up a copy of the above at the Lakeside branch of the Works in hardback for a mere £3 - and what an engrossing read it has been! The story of the Malakand Field Force is of course well known but alot of the background around Churchill's early life was unknown to me - and I have not seen the film Young Winston either! The thing that struck me with this book - enhanced by the authors continued parallels with the current situation in this part of world - is how often history has to relearned in order to go forward - and in the case where the military had become involved how many young men pay the ultimate price.
The author uses much of the material available from the Churchill archive and his modern day parallels seem to be almost uncomfortably (some could say uncannily so) close to the truth. The weapons and technology may change but as the tribal warriors of the hills observe: "You have all the watches but we have all the time."
A couple of points struck me after having read this. I did not realise that Churchill was quite so financially strapped at the time (his writing proved to be quite lucrative) and also just how keen he was on self promortion. He was certainly very brave and saw this as being the foundation of his ultimate career in politics. The other point the author made which struck me concerned of all things drone strikes. Are these a more cost effective way of the carrying out the time honoured 'punitive expedition' to teach the natives a lesson? One has to wonder.
I really enjoyed this book and it has served to reminf me of the adventures in the Roghan Valley I have often mentioned on the blog in the past. Perhaps I need to revisit these....;-)
Posted by David Crook at 13:50

David, Thanks for the review. I'm really pleased you enjoyed the book, as my sister has just given it to me for my birthday present!!

Trust me you will not be disappointed - the only thing is that it may inspire a new period!