1/600th Thoughts and the Portable Wargame 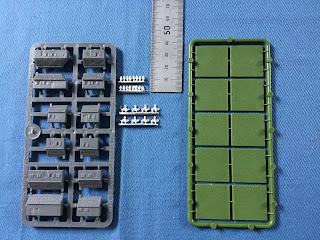 As well the plans afoot for the Risk figures mentioned in my previous two posts I have also been looking at something a little smaller - namely 1/600th scale or 3mm to be precise. The only issue is that these figures from Tumbling Dice are in fact closer to 5mm than 3mm but are fairly basic in terms of details compared to other 3mm models available or the more extensive 6mm offerings on the market. These are actually rather nice models in a generic kind of way which suits me ideally. You can see that the figures fit rather nicely with the Perry Travel Battle buildings which is a different project altogether although I may be doing something with these in a Command and Colours or Portable Wargame kind of way. If I mentioned that I have some assorted WW1 aircraft and vehicles on the way you may see exactly where this may be headed.... 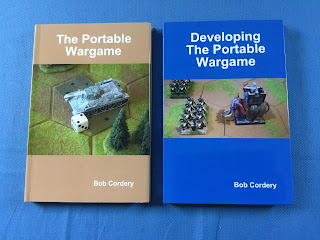 The Portable Wargame - Volumes one and two - with the front cover.... 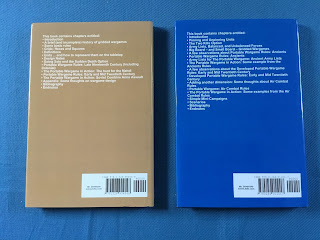 ....and the back which also reveals the contents (and saves me having to type them!).

My old friend Bob Cordery has been a busy fellow indeed. Developing the Portable Wargame is the second book about the concept of the Portable Wargame and what an inspirational read it is. Taking the two titles together is a must in my opinion as the second volume expands upon the first and adds a greater degree of sophistication and variety. If you want a well thought out, extensively tested and extremely well written book(s) about how to fight a wargame then look no further.

Both titles are available in paperback, hardback and ebook formats from Lulu and Amazon and are quite simply outstanding.

I know Bob has some further 'Portable' ideas in the pipeline so check out his excellent blog Wargaming Miscellany for updates as to what is happening and when.

Thanks for the great 'plug' for my two books! It is support from fellow wargamers like you that made writing them worthwhile.

I look forward to seeing how your 1:600th-scale project develops. It's not a scale I have ever used for wargaming other than for naval wargaming, but having seen the figures you intend using, I can see why they might well be better for certain projects than 6mm figures.

I have to say that reading your two books gets better each time! I now have the wherewithal to tackle a number of long planned projects in a manageable fashion and using the 'Portable' concept ticks so many boxes for me.

1/600th is an odd scale but it will make sense when you see what I have planned with it - and the Tumbling Dice models are ideal for what I have in mind.

Agreed: an excellent, complementary pair - a great deal packed into a mere 128 pages. My copy of DTPW arrived last Wednesday. Together with TPW, just about a whole wargames library right there.

That is a very good point well made and in many ways echoes my own thoughts. With the other bits and pieces Bob has planned in due course we could have a real Smorgasbord of war gaming delights.