Back from Foreign Parts.... 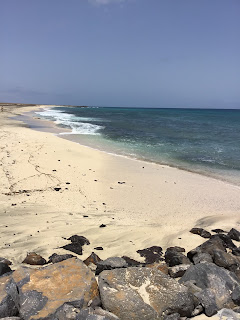 Gotta love a peaceful, empty sandy beach with just the waves and a blue sky for company....

My good lady wife and I have just got back from our two week sojourn to the Cape Verde Islands (actually it was a week ago but I have been rather tied up with a few things) and so now it is back into the domestic round and the inevitable job search. I have a number of 'irons in the fire' so to speak and so am confident that I will be gainfully (or should that be gratefully....) employed in fairly short order.

The island in Cape Verde we visited was Sal and it has been described as a large sand dune in the Atlantic - which is pretty accurate as there is little there for the tourist to explore. We managed a jeep safari which was great fun and swam in the salt lake at the bottom of an extinct volcano - the the Dead Sea experience - so our time was not completely given over to relaxing on the beach. The food and drink were plentiful and the quiet vibe of the place was just what we needed. The motto of the island is 'No Stress' and that is exactly how it felt.

I managed to read two books whilst we were away - The River War and The Malakand Field Force by Winston Churchill - but constantly referred to Bob Cordery's The Portable Wargame for a number of ideas so I suspect you can guess where this may be heading.... 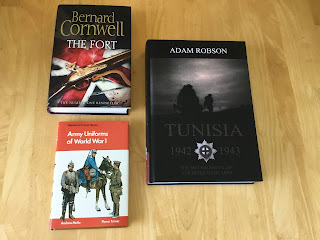 Back in the boot sale groove

Sunday just gone saw our first visit to a boot sale for about a month and I was fortunate enough to score the above goodies. The Blandford title needs no introduction and was not only in tip top condition it also only cost me 50p. The Fort by Bernard Cornwall is on my to read list and I am rather embarrassed to point out that I have still not read the paperback version I also acquired from a boot sale ages ago. Still, a hardback edition is very nice to have and yes, there is a plan of sorts behind this.

The final title is a great doorstop of a tome and is one of books that answers pretty much everything you wanted to know about a very specific piece of a war, in this case the fighting in Tunisia as experienced by the second battalion of the Coldstream Guards. Maps, orders of battle, photographs, after action reports, patrol reports it is all there and as a source of gaming ideas and scenarios from Bolt Action/Chain of Command upwards to Memoir 44 you would struggle to find better.

I have absolutely no idea what I shall do with this but for £1 it was crying out to be purchased!

I managed to get a few ideas organised whilst we were away and am currently awaiting a modest delivery to start on the first of these so watch this space as something will be happening - at long last!

The Fort is a great read.....again and again! Good Luck with the job search.

I am looking forward to this and as I mentioned, i do have a cunning plan....

Good to have you back ... and it sounds as if you have several projects underway. I will follow your progress with interest.

Welcome back mate - glad you had an enjoyable break

Many thanks old chap! First of all I have a few naval items to take care of - which should enable a couple of interesting games I hope. Then on to matters relating to the 19th century methinks....

We had a fantastic time just chilling and enjoying the whole 'no stress' vibe. Sadly it is back to the real world and the small matter of finding a job.

I hope all is well in your next of the woods and say hi to 'Right Stuff' for me!