On the Bounding Main.... 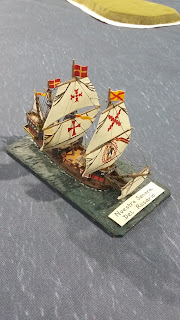 From the collection of Chris Hardman. The models are 1/600th scale and were first used for an Armada based game back in 1988. There is rather a lot of it as well....


Well this is a first. I finally got around to not only having a game on a club night but also to play test a set of rules with my old friend Chris Hardman. The rules in question are 'Galleys and Galleons' by Ganesha Games and whilst they have been around for a while getting them to the tabletop has been a challenge for me due to time.

Kaptain Kobold has used these a lot and if check out his blog The Stronghold Rebuilt you will some of the games he has taken part in as well as some rather nifty scratch built models he has Kobold together for the period.

The scenario was the entry level Pursuit contained in the rules book which pitched a very nimble 'Jacht' against a merchant Galleon. The scenario is designed to get the player used to the game mechanics. Now Chris and I (Chris especially) have played numerous wind and water naval games over the years so you would think we would have a reasonable handle on such things as the weather gauge etc.

After much blundering about and frantic manoeuvring to avoid the islands dotted about the Jacht was able to get a few shots aways but with no effect. It was great fun though and the potential is there for for further entertainment.

The picture above was taken on my phone so apologies for the mediocre quality.

The tool box containing the models was revelation although a couple of models would need a little TLC to get them into fighting trim as the years and much travelling had taken its toll. One model in particular was quite badly damaged. The ship in question was called the San Andreas.

Needless to say I pointed out that it had a fault with it....

Many thanks to Chris for his patience - this play test has been months in the making - and for the game and use of his magnificent collection.

I learned early on that less is more when i comes to placing terrain in G&G, although the frustration can be entertaining :)

You should see the rest of the collection! Seriously though Chris is a very talented modeller and painter with a prodigious output of gaming kit in whatever he turns his mind to.

Whilst we never actually ran into anything it was not for lack of trying! Several times the asteroid sequence from the empire strikes back came to mind....