Following on from my post of yesterday I thought it would be a good idea just to see how the generic 18th century Risk figures could look and also to show the variation if styles from notionally the same edition of the game. 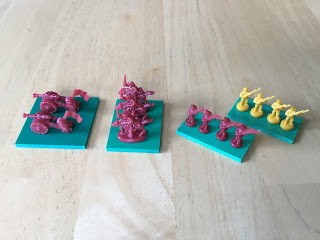 The planned basing convention - note the frontage is 40mm in each case.

I am planning units of four bases for infantry, three for cavalry and two for artillery. the base depths are 20mm, 30mm and 40mm respectively. I am toying with militia types being three figures to a base and dedicated light infantry (rifles and jager types) perhaps having two figures although I have yet to decide on this. 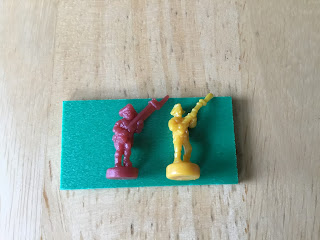 The two infantry types. I have two complete sets of the left hand type and just the one of the right hand figure - which is a more delicately sculpted and scaled figure. 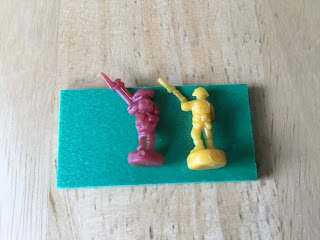 You just about make out the differences between the two types and you can see that the yellow figures have a much thicker base. 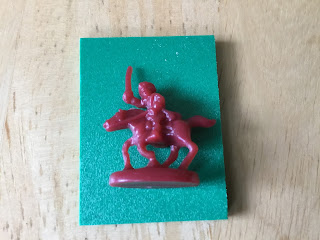 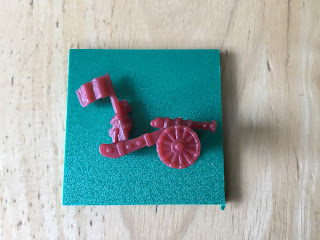 Finally the artillery. The gun is not great but usable although why the gunner has a flag is beyond me...The gun looks more early 18th century than later but it will suffice.

The figures come out at anything between 12 and 14mm so I am hoping that Kallistra will be close enough to be able to fill in any gaps. I want to keep the project as self contained as possible and reckon that there are a couple of conversion possibilities - I certainly have enough figures available to experiment with!

I see what you mean about the thick guns, although those figures have thinner bases.

Kallistra and Pendraken figures do look OK with the Risk figures in terms of actual figure height. The Risk figures are more slender (realistically proportioned), but also have much thicker bases, so *look* taller. But in game-play they mix OK. If you look at some of the Maurice reports on my blog you'll sometimes see them mixed with Pendraken troops, and they don't look too out of place.

The artilleryman with he flag is easily converted to one with a rammer or some kind of spike on a pole :)

I will need to check out the GNW posts on your blog for some additional inspiration methinks. I am pleased about the Kallistra angle as there should be a few bits and pieces in the AWI range I can use if needs be. I had a similar thought about the artilleryman - it is a shame the flag and staff are so small.

Saw this today, with a comparison of various versions of Heroquest
http://leadnpaint.blogspot.co.uk/2017/07/one-word-plastics.html

That would be a useful resource for sure so many thanks for the heads up.

Again a very good shout and it is interesting to see just how much stuff can be acquired and used in ways the manufacturer probably didn't consider!