Napoleonic Uniform Books from 'Back in the Day' 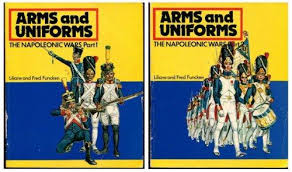 Volume 1 and 2 of the Funcken Napoleonic set and.... 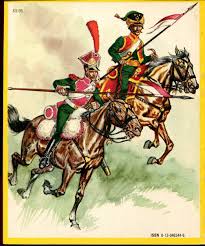 ....the rear cover of volume 2. A striking colour combination in evidence for the Lancers of Berg.

For reasons that will become obvious in due course I have been giving my Napoleonic library some attention. Not so much from the perspective of campaign histories as I am reasonably comfortable with what I have - there are a couple of holes that need attention but nothing major. The one key area that has thus far received scant attention concerns uniforms.

The dedicated figures painter no doubt has a huge variety uniform books to choose from ranging from Ospreys, Blandfords, Histoire et Collections and a whole lot more besides. Of course there is also the internet which has become a valuable resource in its own right. I suppose because I am a (very) reluctant painter of figures my own efforts to build a library of uniform details has been modest to the point of insignificance. 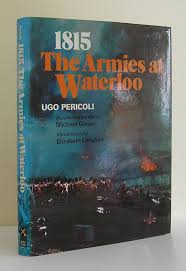 ....an example of the plates contained therein. I deft anybody not to be inspired by the sartorial elegance of the Dutch Lancers!

The very first uniform book I can ever remember buying was the title above by Ugo Pericoli. It was first published in 1973 following the release of the film Waterloo previously upon which he worked. My original copy was a large format paperback I remember buying from a market on the Isle of Sheppey. It has long since gone - disintegrated in fact - but I did treat myself to a hardback version a few years ago. Now it may not be 100% accurate in respect of fine detail but as a source of inspiration to a young and impressionable wargamer furiously painting Airfix Napoleonics it was a Godsend.

The other two books - the Funcken Napoleonic set - I remember having out on almost constant loan from the library and indeed, they provided much information for my Russian Napoleonic Army. I have just acquired these two again and despite the passage of time the quality of the plates contained therein still serves to enthral and inspire.

I now have all of these in my library and they serve as very pleasant reminders of my early days in the hobby. There may well (and probably is) be better and more accurate studies available but for me these will do nicely. I will add a couple of Blandford titles though for completeness as I always enjoyed the 1812, Peninsular War and Waterloo titles.

The two Funcken books were on near permanent loan from the library when I was a nipper too. I'd love a set now but never seem to have any luck finding them at a reasonable price.

Likewise these were a source of constant inspiration in my early years. Having bought both recently I still prefer Funcken style uniforms to whatever newer titles may have produced since. Enjoy them at your leisure Sir!
Best wishes,
Jeremy

Great titles! Although I no longer paint or play with Napoleonics, the titles you mention remain on my shelves, and are fun to pull out, peruse, and read from time to time. Phillip Haythornthwaite's Uniforms at Waterloo and Uniforms of the Napoleonic Wars are two others that you might want to add to your library. Still fairly common and reasonably priced I think.

The Funcken books were my first references, and were also the primary reference among our circle (back then). Out of nostalgia, I picked up a set of them a few years ago to replace the long lost originals. Thanks for this blast from the past.

The Blandford Peninsular War book is a work of art, with the plates so evocative of troops on campaign rather than the parade ground. I think this is one of the reasons that I'm drawn to this conflict. Having missed out on most of thes seminal wargames books from the late 60's and early 70's, due to living in a village, I'm enjoying playing catch up in my late middle age.

I am certainly pleased to have gotten the two volumes I have although having said that i would opt to get copies of a slightly better quality. I am on the lookout for such a set and so should I be successful then I will have a set for sale.

I will post this on the blog if and when it happens!

I must confess that skimming through the pages once again brought back many happy memories from my wargaming formative years. You are absolutely right about the plates, they really 'pop'off the page and are a delight.

I am certainly on the lookout to replace the Blandford titles in due course and the Waterloo title especially. I also rather liked the 1812 book as it captured how the uniforms went from regulation to anything goes over the course of the campaign.

They are great titles and as mentioned what they may lack in minute detail they certainly make up for by sheer impact! They are a great 'one stop' resource.

I also grew up in a remote location - at least remote if you did not have a car - and so haunted my local library. Like yourself I am occasionally adding books to my collection from yesteryear - its like rediscovering why we got into what we got into all over again!

Great books! I practically learned French from the Funcken titles (quite an investment for a young lad on pocket money!) and English from the Haythorntwaithe book on the Waterloo uniforms :-). Still have them, and the Pericoli book too. Nice post, bringing back happy memories!

Even after the passage of many years these still have the power to inspire so represent a good investment in my book!

I have a French language copy of the Funcken books that I bought from a charity shop a few years ago and they are more inspirational than Osprey books.

I must agree with you although I suspect that the Osprey titles may well have greater levels of detail!

You will struggle to find anything more inspirational in my opinion.

10mm would be a great scale for large actions for sure. The Old Glory range has the infantry figures cast in strips I believe which makes for easier painting.