The Shrinking Wargamer and the (Deep) Cut of the Cloth.... 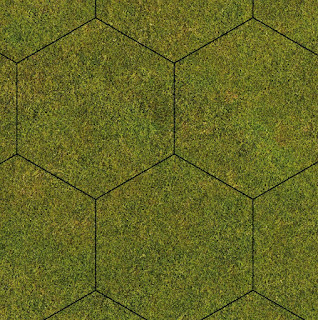 This is a sample of the mat I have ordered. The colour is described as 'Meadow' and the grid lines are at a density of 2.0. These are quite heavy looking but I prefer this to anything lighter. 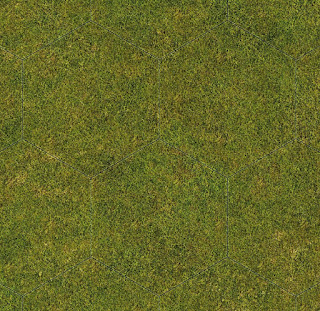 This is at line density 1.0 which is way too fine for my taste!

As the majority of my gaming is solo these days and invariably involves a grid based playing surface it follows that should have a viable solution in place for a table top battlefield. Up to a point this is true although the most pressing need - that of a large hex grid - is currently in the production phase.

I own two boards sized at 3ft by 2ft (one green and one desert) with 3" squares configured on a 12 x 8 basis and the recently penned mat with 4" squares and at 12 x 9. The smaller 3" grid works well with 15/20mm figures but does get a little tight with anything larger which in my case is the 30mm ACW collection.

For hexes I own a ton of Heroscape tiles which are around 1 3/4" across the flats sides and also a whole pile of Axis and Allies: The Collectable Miniatures Game paper mats which are not only double sided but also laminated with pre reprinted terrain. I have used all of these for gaming in the past and will do so going forwards. 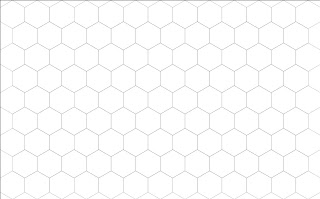 The plan for the mat - Command and Colours (occasionally) Standard. I will invest in a desert mat in due course and may even opt for a sea type although this would probably be with smaller hexes.

What I really needed though, was a hexed playing surface with 4" hexes. I used to own a pile of Hexon tiles and terrain pieces which, whilst very high quality, was not only expensive but a royal pain setting up and clearing away (at least it was to me!). As a gamer that is heavily invested in the whole Command and Colours system I was keen to own a playing surface that would mirror one of their typical game boards which used to be 13 x 9. There is some diversity in this as the Medieval version of the game is 13 x 11 and I believe the Great War is different again. I was not fussed about this as a further (limiting) factor came into play - the size of my gaming table.

The man cave boasts not one but two tables with the larger of the two being 5ft by 3ft. A 13 x 9 hexed playing mat with 4" hexes occupies an area of 52" by 32.5" so fits quite tidily on the table top with some space either side for casualties, reinforcements, dice, counters, rules and other associated gaming flam and paradiddle. It looks neat and means that one can fight sitting down if one desires!

I did chuckle to myself at how the playing area size requirement for me has shrunk over the years. Back in the day I aspired to owning a 6ft by 4ft table - I have a fold up version that I made myself but it has been barely used - but successive rule evolutions over the years have reduced that to either 4ft x 3ft or 3ft by 2ft. As my games, even when using figures, tend to be quite abstract with units represented by a handful of figures it is probably easy to see why.

The hex mat I have ordered is a neoprene version from Deep Cut Studios. As it is in effect a bespoke item I have been in constant contact with them and have been impressed with the customer service at the very least. I will post pictures of it when it arrives. Having a 4" hex size means that I will be able to avail myself of the terrain pieces available from Hexon which will save a lot of time and effort. I still need to think about buildings though.

I had to look closely at the 1.0 density thing to find the hex lines at all! And my vision is a heck of a lot better than it was just over 12 months ago. I think if using grids, you might as well make them easily visible as the thing is abstract anyway. For myself, I find the grid sinks to a subconscious level and tend to be more conscious of the terrain.

That was my thought entirely! I have no issues with a visible grid although can understand why some might. I am hoping that the may arrives in time for Christmas but I am not confident.

I certainly agree about the 'subconscious level' angle - in my experience it tends to disappear when the action gets fast and furious or up close and personal!

Well I can't honeslty make out the 1.0 lines, so the 2.0 definitely gets my vote. As for table sizes changing over the years, I too aspired to a 6' x 4' pne with some space to the side for books, figures etc and with storage underneath. Maybe this will happen one day, but currently a 4' x 4' board on the dining table fits the bill perfectly for my gaming needs. The storage is still an ongoing issue though...

I am fortunate in that I have a dedicated table that is in the man cave and for sure, I can get the 6ft by 4ft out should the need arise. I think the whole size issue is probably dictated more by the type of games I play these days - using a grid seems to take up less room.

Apparently the 1.0 lines are very popular but using the much thicker (and more visible) version is fine by me.

Hexes are a GOOD thing IMHO ;)