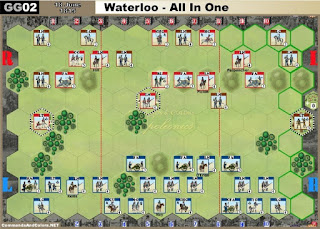 In many ways this has an air of inevitability. It is the culmination of over 45 years of wargaming experience, of armies collected, painted and discarded; of rules used and filed away never to be seen again and of wistful flights of 'what if?' It represents everything I got into wargaming for in the first place. It is a small rain swept and muddy field in Belgium in June 1815. It is Waterloo.

OK, dramatic introduction over with - I am going to use the Del Prado collection to fight the battle of Waterloo at some point this year. I shall be trying the armies and rules out on a much smaller action to begin with but a refight of Waterloo based on the above scenario is the ultimate aim.

There is a basic scenario for the battle during the 11am to 3pm phase contained within the base game but I am looking at the fuller version that is available on the Command and Colours: Napoleonics website. This covers the whole day and includes the arrival of the Prussians.

There are a number of things that need to happen before I get to this stage. First and foremost the figures need to be completed which is currently in hand. I need to work on the terrain to go with the new mat - this is more generic than strictly Waterloo based - and is also in hand. Finally, there is the small matter of the rules I will be using as currently these exist as a series of scribbled notes and loose ideas.

For sentimental reasons it would be nice to fight this on June 18th but for practical reasons this will not be happening - it falls on a Thursday for one thing - so the plan is to look to do this at some point during the summer months.

You would probably need to go back to the early 1970s to know why I am doing this and in truth it is very much a personal thing. I cut my wargaming teeth on Airfix Napoleonics back in the early 1970s and so tackling the battle using painted 25mm metal figures was an aspiration then as it is now. The Del Prado collection has given me the wherewithal to realise this and whilst the battle itself was the end of a historical era for me it heralds something of a Napoleonic renaissance as I plan to explore the latter years of the period in more detail - 1812 until 1815.

I have mentioned previously that I will own representative forces for the Anglo-Dutch, Prussians and French once the current refurbishment work is complete. I have the beginnings of a Russian army which would not take too much work to get to fighting trim which leaves our old friends the Austrians. In effect I would be raising one and a half armies from scratch. With the armies coming in at slightly larger than Portable Wargame size even I would not have too much trouble raising the appropriate forces. The great thing is that the Del Prado collection features figures painted in a simple flat colour style that would be easy enough to replicate which in turn means that my own efforts will not look too out of place.

It was my original intention to renovate my Del Prado collection to refight the Battle of Waterloo ... and reading you blog entry has reminded me of that. Perhaps I ought to follow your example and actually follow through on my plan.

It would have churlish not to have attempted the battle at some point! I certainly have sufficient figures based on the C and C scenario and having it as a goal has certainly put 'steam in my strides' so to speak.

It would be interesting to see how your version runs compared to what I am planning from the rules perspective.

Hi David -
I've had a similar ambition, though more involving my own 'Army Level' rule set BE4ST. I have, however, run into a small problem concerning the relative sizes of infantry formations. Seems Command and Colours might have solved that problem for me.

Meanwhile, Paul (Jacko) has occasionally expressed his own interest in 'doing' Waterloo using the NPW game system. He'd probably be supplying the Prussians. I didn't think my hex-table big enough, but it seems I might have to give that another look, and all!

Methinks I might end up doing both!
Cheers,
Ion

It’s what brought many of us here. It’s The Battle. Great intro by the way.

C and C is such a simple system that I don't think there is any need to try it out on a smaller action first. Most battles on the 13x9 grid will take less than 2 hours even when playing solo.

Ah, Waterloo, the one and only Napoleonic battle which really matters.

I've played it a few times using various different rules. Many decades ago we did it using WRG 16xx to 18xx and piles of Airfix figures, scaled at 1:200 (so each battalion represented a regiment). That took all weekend.

I expect the CnC version will be a little quicker!

From a purely objective view the battle was not one of Napoleon's finest days but for me the whole campaign encapsulates the Napoleonic wars with the man himself at his very best and his worst - all in the space of a hundred days.

It is rather like a Greek tragedy in many ways.

My days of massed 'Cecil B. De Mille' spectaculars involving a cast of thousands are long gone but I reckon I could give this a good run using the Del Prado collection and a hex based set of rules that are not Command and Colours.

I think that moving away from being tied to individual units was a bog help as mine will be purely representational.

I will not be using the C and C rules - merely the set up. The rules will be based on C and C but with a number of unique 'Crookisms'.

That is why I shall be running a smaller test first of all.

A man after my own heart! Never mind all that Austerlitz and other stuff - Waterloo is where its at!

I realise that the Napoleonic purist would be mortally offended by my apparent obsession with 1815 but what the heck.

I used to like those WRG rules and had some cracking games with them back in the day - nothing quite as large as you did though.

The Hundred Days campaign is certainly fascinating, but I feel more drawn towards the Peninsula War and the Danube Campaigns. I remember the old Airfix magazines having a 'photo or two of Waterloo at a wargames show (no idea which) on absolutely massive tables, that for a child were way beyond anything we could remotely achieve. I think that put me off Nappies for many, many decades.

However having read Chandler's book on the Hundred Days, I am now drawn back to this period and have played some of the battles in the lead up to Waterloo, that have been great fun. So I am looking forward to see how you are going to play this with your lovely figures.

The closest I have come to that 1815 feeling was with the war in 1812. Many years ago i was planning, and indeed started a Russian army using solely metal figures - my first metal army in fact. More recently 1809 has given me something to think about as has the Peninsula.

Chandler's book is a great read - I would suggest Jac Weller's book as this is also very good. For period feel then David Howarth's A Near Run Thing still inspires me after all these years.