Thoughts on a Basing Dilemma 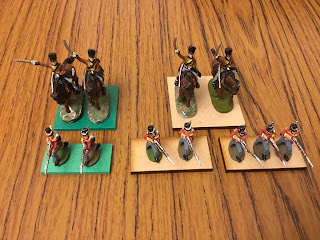 Basing styles. The left hand figures (on the green bases, available from Essex Miniatures) have a 40mm frontage and a 20mm depth for  infantry and 40mm for cavalry. The figures on the right (based on MDF) have a 2” frontage and a 1” depth in the case of the infantry, 2” for the cavalry. The three infantry figures and two cavalry are the Portable Napoleonic Wargame standard

Strictly speaking this post should be number 10 in the 'Planning a Napoleonic Adventure' sequence but instead I opted to write this as an accompaniment to the ongoing series.

I am going through another of my bouts of indecision and so are having second and third thoughts about the most effective way to tackle the basing of my Del Prado collection.

Originally my plain was to replicate the style I used for the ACW collection which used the convention of 1” circular bases for foot figures, 1” by 2” pill shaped bases for mounted figures and artillery pieces were left unbased. In effect this would be using a single figure to represent a Command and Colours block.

I then leaned towards using a system based on that employed by Bob Cordery’s Portable Napoleonic Wargame which uses 2” by 1” bases for infantry with 3 figures and gun crew in 2s and 2” square bases with two cavalry figures or an artillery piece. Rifle armed infantry use a 1”.

Given the variety of figures that are present in the collection it would appear that basing figures individually wold maximise the numbers I could use. This would be straight ‘1 block, 1 figure’ exchange which would certainly make translating Command and Colours scenarios onto the tabletop very straightforward.

I have hit a small snag going down the Portable Napoleonic Wargame route as, taking the figure mix I have available there are going to be a number of unusable figures due to unit sizes, in effect leftovers. I am not keen on mixing different poses of figures in the same rank especially when it is a single rather than deeper.

Another option that has appealed to me is to use a two figures base for infantry and cavalry and to use a '1 base, 1 block' system. This has a number of advantages. A standard 4 base infantry unit can be deployed in two ranks meaning that mixed figures can be given a purpose. For example the front rank kneeling firing and the rear rank standing. It also means that I can incorporate command figures, standard bearers, musicians etc. It means that I can maximise the variety of figures I can use from the collection and better still, as most of the cavalry are organised in multiples of 8 figures, all the units will have more of a tabletop presence.

The disadvantage of this method is connected to the base sizes themselves. The 2" x 1" base for infantry with 8 figures spread across 4 bases occupies an area of 4" by 2" which takes up a big chunk of a 4" Hex. the infantry also looks a little on the dispersed side. For cavalry it is even worse because a four base unit would be 4" x 4" which makes for some hex overhang - something I am keen to avoid. Using a 40mm frontage so that an infantry base is 40mm by 20mm or 80mm by 40mm when deployed in two ranks of two bases and the cavalry is 80mm by 80mm which looks a lot more compact within a hex. the 40mm frontage would appear to be the more attractive option should I decide to go down this road. Naturally it will also mean a complete reorganisation of the armies....

I have stepped back from my earlier decision in order to consider fully the options I have mentioned but as luck would have it I do not need to take any basing specific action just yet. The great 'unbasing' continues with both the Highanders and the Guards currently in soak and I am half way through cleaning up the Prussian cavalry so progress is definitely being made.

I think the multiple-figure-based infantry look too spaced out. Putting figures on individual bases gives you so much more flexibility, including using sabots, for other games.

Hi David, in spite of my previous comment re the movement issues of individual figures I still think it's the best way to proceed with the figure per block replacement. For Commands & Colors it just looks right to me, my issue was more to do with storage and getting individual figures onto the table without damage as I tended to pick them up by the handful, once set up on the board/table it was definitely the way to go. Regards, Lee.

A tricky decision for sure. I think the easiest way to solve this would be to get you hexed mat out and put down the various options listed on temporary bases (card painted green?) and then see which looks right to you. When you see them en masse, it should help to decide which route to go down. Hope this helps?

The more I look at them the more I am agreeing with you! I am also thinking that sabots or movement trays with individual figures would be a good option.

I am thinking more and more along those lines. I keep coming back to C and C as the benchmark and crucially I know it works as I have tried it with the ACW figures.

I have done this but as it was in the man cave at night I did not bother with pictures. By virtue of the make up of the collection the individual base option with sabots/movement trays seems to be the best way forward.

I tend to go the 'doctorphalanx' way - figures mounted singly or in pairs. I've been using PWG systems for a few years now, with the 'horse and musket' armies based in that way. I've not yet experienced any problem about 'who goes where'.

My late 19th Century 'imaginations' work on a basing scheme from Phil Barker's 'Horse Foot Guns' game system. Works for me! If I have a regret it is (re)-basing my 30YW plastics for DBR - just when I had worked out an 'old school' free board rule set of my own that had stood the test of a few battles. In that set the figures had been again individual or paired.

What's worse: my own rule set has disappeared...

The difficulty of the hex is the sharing of that space when it contains both units and terrain, so thought needs to go into design / size of terrain as well as the unit base size.

Two of your figures on a 30mm frontage instead of a 40mm might look good (not too dispersed). If you have to have 4 bases for a C&C type game, you could do an arrangement of 2 x 2 bases at 30mm each, which would give you a 60mm x 60mm unit footprint in the hex.

Perhaps it is time to make some cardboard blanks and try it out.

After having thought about it I am coming to the conclusion that individual figures will be best but with some movement trays.

I can organise a base that will hold up to 4 foot figures (each on a 25mm circular base) or 2 mounted which will serve for the Portable Napoleonic Wargame or when I 'free table'.

That is as far as my thinking is taking me.

The whole 'figures and terrain in a grid area' is an ongoing problem and so for me using individually based figures makes sense. I am exploring some 2D options for terrain which reduces the footprint within a grid area but will have to see how it plays out.

I had not thought about 30mm bases and certainly I would consider that for anything smaller than 25mm.