The Man Cave and some Mysterious Figures

I am feeling pretty good at the moment as not only has my health improved considerably but it has been a good week on the domestic front as well as being productive on the gaming front. 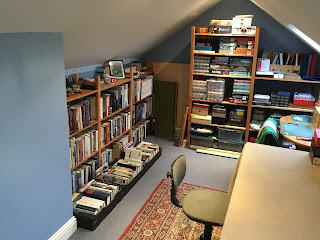 The ‘book’ side of the man cave 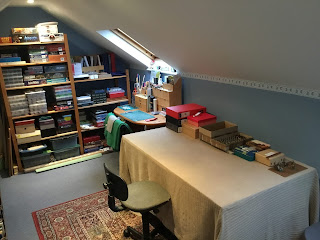 One of my jobs for this week was to tidy the man cave so I thought I would share a couple of pictures of how it now looks. The biggest change has been moving the table back to its original position and I have been able to get all the remaining boxes of Eric’s collection under it. This is an immense breakthrough for me as the whole area was really beginning to get me down. 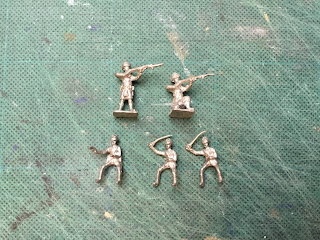 Two Highlanders and three cavalrymen - an officer and two troopers

Whilst tidying the boxes of Eric’s stuff I came across the figures you see below. They are obviously Colonial types and I am thinking that maybe they are Jacklex. They are rather nice in an old school way and I would certainly enjoy using them.

I have to say that finally getting around to sorting out the man cave was enormously satisfying - even getting the vacuum cleaner out and cleaning the Velux windows was a pleasure - and the area is now well placed for the forthcoming gaming frenzy I am planning.

A very tidy man cave - unlike my tip ! , yes they are Jaclex colonials and very good too .

I feel very much better for having tidied the man cave and hope to keep it relatively sane for the foreseeable future! The figures are rather nice and if I ever dabbled in Colonials I reckon these would be in with a shout!

That's a nice man cave which I sadly don't have and am unlikely ever to have one. I had hoped to use our daughter's bedroom whilst she's at Uni, but my wife had other ideas:(.

A very nice man cave indeed. I've been trying to work out how to a table into mine, but as it also has to accommodate a wardrobe full of uniforms, I think I'm out of luck.

Due to the shape of the room it really needs to be kept tidy as it is very easy to make it look like a shambles! This time f year means that I only see it in daylight at the weekends when there are usually other demands on my time. Having a spare day during my week off was the ideal opportunity to have a sort out.

I am rather taken with those Jacklex figures and reckon there is certainly some mileage in them for me.

I am lucky to have this space but originally I wanted what was my son's room but it is now occupied by my daughter!

I can go to a 6ft by 4ft if pushed but to be honest prefer using a smaller playing area so the 5ft by 3ft works just fine.

No uniforms but pretty much all bar one shelf of the book collection.

It certainly is! Aside from the layout the only other issue is the lighting as taking any pictures other than under natural daylight is problematic due in part to the slope of the roof.

Having said that I would rather have the space than not!