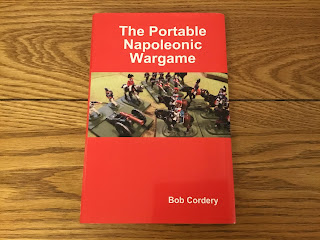 One of the best wargaming books in my collection and what will be a cornerstone of my Napoleonic adventure.

I am feeling a whole lot better than earlier in the week and as a result have been able to catch up on a number of outstanding issues as well as formalising what I am going to do with the Del Prado collection.

All the Prussian cavalry are now off their bases and I have made a start on the British. I have a couple of minor repair jobs to attend to but plan to do this when I get to the painting and basing stage. The bases will be painted in my standard Humbrol Satin 131 - the same as for my ACW figures - and will not be flocked.

After having looked through the collection for the umpteenth time I have come to the conclusion that I have been looking at it from the wrong direction. I had all these good ideas about using the figures for all manner of games because having the figures based individually meant that there was plenty of flexibility about what I gamed and how I gamed it. This is fine in theory but realistically my focus is pitched squarely in what I would call the ‘traditional battle’ style of game. For me this is around a dozen or so units a side which is basically anything above battalion level.

I like the idea of commanding brigades, divisions and even corps so of necessity using a scalable rule set where the number of figures in a unit merely serve as an indicator of the general type works well rather than saying 1 figure equals x real troops. Bob Cordery’s book does this very well indeed so it makes sense for me to look to this as my first point of reference. Given the vagaries of the Del Prado collection and the increasing scarcity of the figures it makes sense to utilise what is available as fully as possible. Whilst my collection is considerably smaller than his the same principle applies.

With this in mind I have taken the decision to base my armies using the Portable Napoleonic Wargame as a guide rather than basing figures individually. Bob’s rules contain much to commend them but - and I am sure he will welcome this - there are a few things I will be incorporating for my own benefit and based on my own understanding of the period but his suggested basing strikes many chords with me.

I will tinker with a number of other parts of Bob’s rules simply because I have a few ideas I want to try out but this will not be a problem.

There are rule elements from such sources as Volley and Bayonet and from the pen of Charles Wesencraft that appeal and this collection will be an ideal way to embrace these concepts whilst being anchored in the Portable Napoleonic Wargame.

I have a similar project of my own under way except is that it is halted until I get my silhouette scenery produced. I have to wait.

I hope to use at least 4 divisions per side or even larger.

All this is in 10mm on a Heroscape landscape.

Hi David,
That sounds a very sensible basing option. From personal experience I have found that whilst I like the flexibility of individually based figures, once you hit a couple of hundred or so of them they begin to become a bit of a pain to move from storage to table etc. I take it those Del Prado figures are getting harder to find now days? Regards, Lee.

I like the use of multi figure bases over individual bases. You could make some temporary bases with Blu-Tak or Copydex as a temporary adhesive, while you firm up any decision.

Sounds like you have a reasonable and sensible plan. for my games I have now gone with 3 figures to a base, with 4 bases making up a unit. This allows them to used across a wide range of rules, from skirmish up to Brigade and Divisional level games.

Funnily enough I had considered the 'two figures to a base' idea but within the realms of the Del Prado collection this may have been an issue due to availability. Your 10mm idea sounds really good so I shall certainly be looking out for pictures in due course.

I take your point about moving hundreds of figures around but for this collection it would not have been such an issue as the armies will be smaller in terms of headcount. The main reason for me really has been that the majority of games I plan to fight will be a larger scale so multiple figures bases are more convenient.

The Del Prado collection is no longer in production but there is modest secondhand market. For my part I would not have considered this as viable unless I could have gotten a collection the size of what I currently have.

Bob Cordery and I have already sorted out a modest exchange that will help in the short term but I still have a few holes to fill - luckily nothing that would stop me from putting a game on though.

I briefly considered doing that but will go for multiple bases. Fortunately much of the cavalry are already on bases of the required sized (50mm square with two figures) so it is only really the infantry and artillery that will need the most work.

There will be some individually based figures - possibly even enough for a small skirmish - but for the most part the figures will be in multiples.

Ideally I would have liked to gone down the 4, 3 and 2 bases of figures for each unit but the collection, although large, would be limited in terms of the number of units as a result.

As is usual with these things I don't know why I didn't think of this in the first place!