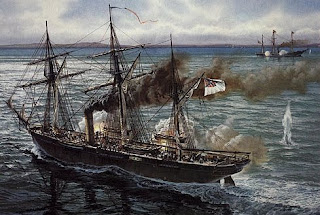 Despite rudder problems experienced during heavy weather crossing the Bay of Biscay, the C.S.S. Stonewall, under the command of Captain Ehlrich Longsdarff - had managed to effect the necessary repairs during a brief stopover in Portugal and had successfully crossed the Atlantic Ocean, bound for the South American coast. She had been ordered to head into the Pacific Ocean and to operate against Union shipping in the hope that ships would then have to be redeployed from the Atlantic and Gulf of Mexico, thereby loosening the vice-like grip of the blockade. She would stop for supplies in Uruguay and would then head due south. The plan was sound but for one small factor - the almost ever present Union fleet represented by the frigate the U.S.S. Sacramento and the sloop, the U.S.S. Niagara. 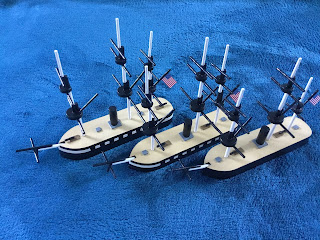 The Union ships - from left to right the frigate U.S.S. Sacremento and the sloops U.S.S. Niagara and U.S.S. Kearsage

These two vessels had been following her almost from when she had left Portuguese waters but were content to merely shadow the Confederate ship. In truth it would be a risky endeavour taking on an ironclad with two wooden ships so the Union hope was that they would fall in with some form of reinforcement and overwhelm the Confederate ironclad by sheer weight of numbers. Regardless of what was available the Rebel ship would have to be engaged at some point - she was too powerful to be allowed to reach American waters. 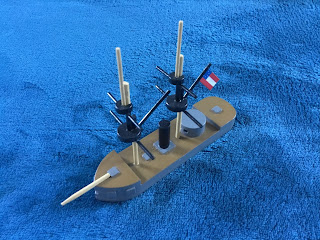 As the three ships headed towards South American waters the commander of the Union ships, Commodore Franklin E Howard, considered the choices before him. His command could continue to shadow the rebel ship and indeed, if required he was sure they would be able to overhaul their quarry at a push. The problem was that having done so there remained the vexing challenge of exactly what to do with the rebel ironclad. Howard was not confident that his artillery could do little other than bounce off the Confederate raider - the reverse however, would certainly not be the case. Wooden warships were the navy of yesterday whilst the ironclad was the future. He reasoned that his best and only hope would be to attack from all sides so as not to give his opponent the opportunity to engage a single enemy favourably. Attack from all sides? With two ships? He had no immediate answer to this conundrum but fate would soon intervene, and in the most positive way.

The Union sloop of war, the U.S.S. Kearsage, was currently on the same heading as her countrymen but some half a day or so behind them. Her commander, Captain Nathaniel Jones, had received reports of smoke far ahead but these were unconfirmed as the sightings were so intermittent. Nevertheless, he had an instinctive feeling that something was afoot and so urged his engineers to push on at best speed so as to be able to identify the mysterious and evasive cloud of smoke ahead.

Having recently been refitted the U.S.S. Kearsage was able to gradually close the distance to the mysterious cloud ahead and so was able to identify not one, but two Union warships.

News soon reached the Commodore of the presence of another Union warship and so he wasted no time in inviting her Captain aboard as soon as the ship was alongside. He also summoned the captain of the sloop U.S.S. Niagara for what would be a council of war. In the meantime, all three ships were to make ready for action.

Aboard the C.S.S. Stonewall, Captain Longsdarff was well aware of the two ships that had been shadowing him for what seemed like an age. He was not overly concerned as he was confident in the ability of his ship to best either enemy ship, even both if the need arose. He toyed with the notion of piling on all seam and sail and attempting to outrun them but was mindful of his coal situation. He would need to refuel once he made landfall in Uruguay and could then slip away to head south and into the Pacific. For now he would continue on his present course.

After pleasantries had been exchanged the Commodore and his two captains got down business. It was speedily done. The U.S.S. Sacremento would pile on all steam and sail and draw ahead of the two sloops. They were to follow and once the frigate was engaged were to head off at an tangent to the flagship, thereby catching the Rebel ship between fires from opposing beams. At this moment the two sloops had to steam in very close proximity so that the Rebel ship would think that there was only one ship in support rather than two. The Commodore was gambling on the fact that whilst the Rebel ship would probably take on two weaker vessels - especially if they were well separated when engaged - she would be unlikely to attempt the trick with three assailants so surprise was essential.

Once the frigate was engaged the two sloops, with the heavier gunned U.S.S.Kearsage in the van, would need to close on the Confederate raider quickly so that her attention would be distracted. For the Commodore and the Union squadron, timing and surprise would be critical. The captains of the two sloops repaired to their commands whilst the U.S.S. Sacremento went to full steam and added on as much sail as she could carry.

Captain Longsdarff noticed the appearance of both a full spread of canvas and of great gouts of smoke from the rapidly closing Yankee frigate and so immediately gave the order for action stations. The C.S.S. Stonewall would engage the frigate and when he had finished with her would then tackle the sloop he had seen in the far distance. If the smaller of the two Yankee ships was fool enough to interfere he would tackle her as well.

Eagerly the C.S.S. Stonewall swung about, unaware that she was heading into what the Union Commander hoped would be a trap.

I hope that we won’t have to wait too long before we can read the battle report.

The action should be fought over the next couple of days - it is set up and ready to go - and I am really looking forward to it!

I suspect that someone will work out the inspiration for this - I have rather left an Achilles heel in the title methinks!

I certainly hope so! It is something a little different for sure - at least in my ACW naval experience anyway.

Woo - one of them there 'disguised scenarios'. Can't wait to see the outcome!

You will not have to wait too long! It was a brisk little action for sure!