The Age of Imperialism on Mars? 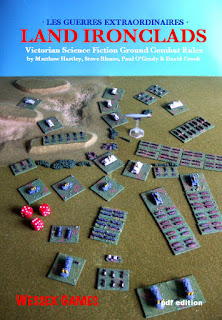 Back in the day that was a lot of fun!

I have always been keen on Victorian Science Fiction. I have been an avid reader of Wells, Verne, Burroughs, Conan Doyle and others for many years and collection of the works by these worthies nestle safely in my Kindle (and via the Kindle App on my trusty IPad). Many years ago I contributed to a set of rules called Land  Ironclads - published by Wessex Games and set within the Aeronef late 19th century universe. Brigade models have a huge range for both rules which I believe are available from the Wargames Vault. My input was limited to the section on the Turkish army of the period although I recall suggesting that the scale of 1:1200th for the vehicles was adopted to tie in with the Aeronef models. 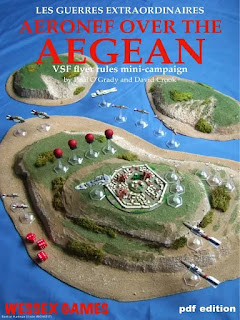 This was a great collaboration with Aussie Paul - we had a lot of fun with this for sure!

It was all enormous fun at the time but enthusiasm waned and I never really raised much in the way of forces for it. I did rather more with Aeronef though and scratch built Turkish, Greek and Bulgarian aerial fleets and collaborated with Aussie Paul on a mini campaign supplement that again, is probably on the Wargames Vault somewhere. The scratch builds were solely dirigibles and I remember hoovering up vast quantities of plastic aircraft kit ordnance - dirigibles look like bombs after all - and churning out loads of models. It was all great fun.

At the time I had not read John Carter so did not get the whole Barsoom thing. As I remember correctly Space 1889 was already established when Aeronef was launched so the VSF in that universe was largely confined to the planet earth. There were plans for a naval version - Aquanef - and even for a space version - Astronef - but these never got beyond the testing phase which was a pity really,

Anyway, what is the point of all this meandering reminiscing?

I always rather liked the idea of Redcoats on Mars but was not totally sold on the Space 1889 interpretation. As an aside I wonder how many of us when looking at a fantasy/science fiction setting are truly invested in what the creator intended? For me I like elements of the 1889 version as well as bits and pieces from John Carter but the way I see it it can be sliced and diced however you want - in much the same way as any earth bound imagi-nation.

Whilst wading my way through the Age of Imperialism figures and looking through the Plastic Soldier Review for inspiration (and yes, there has been rather a lot!) I came across a box of Sea People infantry from Hat. Something clicked. The figures have a suitably exotic appearance and lord alone knows why but they screamed out to me ‘Red/High Martians’!

I reckon there is some mileage with these figures for what I have in mind!

Don’t worry, the sun has not totally addled what is left of my grey matter as the next set I looked at was of unmarried Zulus and British Zulu War Command so normality of sorts has kind of returned. 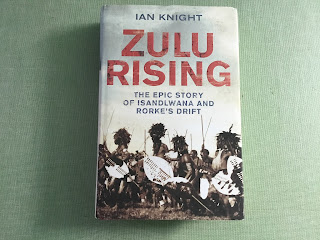 One of the best books on the subject by the indefatigable Ian Knight. I simply had to dip into this book again and yes, I will probably watch Zulu and Zulu Dawn again - purely in the interests of research naturally…..

I rather liked the ideas of Flyers operating over the Martian landscape - Sky Galleons of Mars style - and was thinking about all the leftover and so far unused MDF templates I have kicking around. I reckon producing some self designed models for this would  not be too difficult - along with some Martian style ground vehicles - perhaps with the Martian types modelled on some of those wonderful looking Chinese/Korean/Japanese warships of the 16th/17th century.

Designing a VSF setting to suit one’s own purposes should be no different than any other imagi-nation and it is one of things that you either enjoy doing or not.

So, it looks like a small force of redcoats will be assembled with Zulu and Martian opponents. For the latter I shall look to make some flyer/aerial gunboats and perhaps even some Land ironclads.

First of all though, the small matter of the remaining ACW bits and pieces - and I am including figures in with this as well!

I'm sure we've all been tempted by this at some point David. Way back when there was some dabbling with FWC to do this sort of game, but nothing ever came of it. Add in some 'Invasion Literature' period stuff as well as I think it could be loads of fun.

I have history with VSF but to be honest I have really struggled to get excited enough to try out a predefined setting - there always seems to be something that has not sat well with me. Rather than slavishly following someone else’s ideas I would prefer to do my own thing - which it pretty much a mash up of a number of ideas!

The key thing is that a small force of historical redcoats can be used either way - in my case against the Zulus and then the Red Martians! The VSF angle is very much a project within a project and in any event nothing will happen until the ACW is finished and that includes the figures.

It is a sideshow of s sideshow in many ways but should be a lot of fun if what I have in mind comes to pass. The MDF bits and pieces are largely hull templates that were not quite right for one reason or another so have not been used for the ACW stuff. A lot of it would be perfectly serviceable for aerial gunboats and Martian Cloudships and I even have some ideas for Cavorite ‘powered’ spaceships…..

Then of course there are the ground ships….

Methinks Warbases are going to be busy!

It has taken me around 40 odd years to get to the stage where planning ahead seems like a better idea than taking things on the fly!