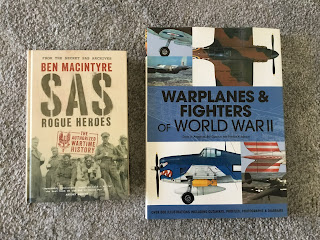 Two unexpected but welcome additions to the library. The SAS title is a more weighty tome than the title might suggest whilst the aircraft book is big, brash and glossy! At a mere 30p each they were an absolute bargain!

It is a Sunday morning in June and whilst usually at this time of year SWMBO and I are normally found in foreign climes (Facebook continually reminds you with memories of the days in question - this time two years ago we were in Cuba….) when we are not then our local boot sale is the next best thing. Wandering around in a boot sale in the hear we have today was a tiring experience for sure but SWMBO, my daughter and I all came away with some goodies.

Boot sales are funny things in many ways. When they first start up they are primarily made up of people disposing of their bits and pieces - which is preferable to what usually happens next. After a while as the sale in question becomes more popular so the dreaded traders start moving in until eventually you end up with what is more like a glorified street market selling all manner of ‘tat’. Our local boot sale was starting to head in that direction but recently the trend has been reversed so that ordinary household sellers are once again in the majority.

Anyways, the two books you see above were added to the library - both are in pristine condition and they cost me 30p each. That is right, 30p each!

I would not describe myself as a SAS fanboy as such but I am interested in their WW2 operations, along with the SBS. Raids are great for gaming as one does not require much in the way of material to put on a cracking little action. I have a hankering for some operations in the Aegean at some point, probably with a naval angle - shades of The Guns of Navarone - so anything WW2 and ‘special forces’ related will always catch my eye.

The aircraft book is a big, glossy, coffee table style book with some very nice full page colours plates and cutaway diagrams. There is technical detail and to be honest nothing contained within the pages of this book was of earth shattering originality as most of the information has been recycled ad infinitum over the years across many other publications. Still, the eye candy is very nice indeed and for 30p I was not about to complain!

Today was the first time for some weeks I managed to buy anything - picking have been very slim - so the two new books are a welcome addition.

Interesting title for the aircraft book.

'Warplanes & Fighters of World War II' which implies to me that 'Fighters' is a different category to 'Warplanes'.

Both my phone and my Kindle have reminded me that in years gone by today I would either have been in St Augustine or somehere near the US Continental Divide depending on which year.

As mentioned our last holiday pre the pandemic was in Cuba and it was one of our best ever. It is nice to be reminded of great times in the past but at the same time a little sad as we have been unable to add to the memories with new venues!

It did give me pause for thought along similar lines - I can forgive it though as the artwork is really nice!

Have a look at this one. My first go at blogging.

I certainly did - what a trip! We have not done anything quite as ambitious - our holidays tend to be of the two week and hotel based variety. I always make a point of checking out the historical side though!

Thank you for pointing me at your post - it was great fun to read!

Having skimmed through both of the books I am very pleased with them - especially at 30p each!

I am always a little wary of so called ‘coffee table’ style books but this particular aircraft book was certainly worth it. It is certainly not the last word on WW2 aircraft but a worthy addition to the library for all that.