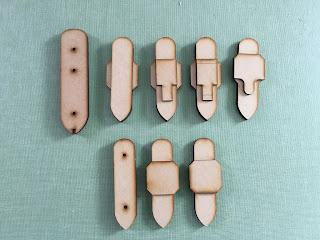 The beginning of the end. The top five are for the Confederates whilst the three below them are for the Union. 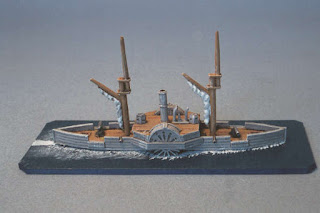 The U.S.S. Sassacus - I shall be building a pair of these useful ‘double ender’ gunboats. The model is from the collection of that well known naval rule writer, Bon vivant, wit and raconteur, Mr David Manley to whom grateful (and embarrassed) thanks are extended!

“And now, the end is near….” I must confess to being a fan of ‘Ol Blue Eyes and as I was coincidentally listening to him whilst starting work on the remaining ACW ships it seemed kind of appropriate that ‘My Way’ was the accompanying soundtrack!

My order fromWarbases is in the post so I made a start on the hulls of the remaining ten ships I had planned. These will be split equally between both sides - five models each - and the picture above features eight of them. The other two will be a pair of ironclads for the Union - one of which will be another City class gunboat. 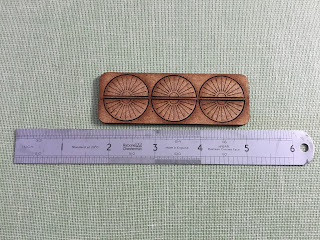 Mmm…I wonder these could possibly be for?

I must admit that I had fell a little flat with this project when I realised that I had messed up what I thought was the final order but after a couple of weeks of revitalising myself with a few other bits and pieces am now raring to go again. It is a shame that I was unable to finish these before going back to work but what is left to build will not take too long to do.

When the final ten models are built I fully intend having a full fleet review and will also then turn my attention back to the rules as well as thinking about a few items of terrain. Next up on the project list will be some old West gunfighters and the small matter of the ships for Lake Tanganyika in WW1.

It is certainly good to be back at the modelling tray!

I am looking forward to getting the Grand Review…

Even at this late stage I still have a momentary wobble in respect of the ships I was going to build! I have settled on the models now with one possible exception so can crack on with the key parts.

I am looking forward to the review - mainly because it means I would have finished them!

I’m going to need to get some sandwiches and a coffee if I’m going to watch this fleet revue. The sail past could take a while! Nice detail on those paddle wheels by the way!

With me going to back to work on Monday the review will be slightly delayed but I reckon all will be finished in a couple of weeks. I would add a comfy chair and some sun tan lotion to go with the coffee and sandwiches!

Martin at Warbases did a really nice job on the paddle wheel covers but for painting I am going to deepen the lines very slightly so that they take the paint better. Most of the paddle boxes for this batch are white although a couple are light grey.

Now that I have everything I need I am really pumped up to get then finished and in action soon!

Very Churchillian old chap! I did not realise that the model was from your collection - very nice it is as well - so I will amend my post to extend my thanks for, ahem, letting me make use of it!

Beers will be forthcoming!

I'm glad you found it :) That model must be 25 years old now, I bought it as soon as Rod released it and it must have been around the mid-90s

It is a lovely looking model for sure and has certainly aged well!