Four days into being back in the office and if feels as though I have never been away! Our suite is lowly taking shape and the phones will be finally sorted out today. My back was improving but I must have slept awkwardly last night - no doubt as a result of over exuberant celebrations following England's victory against Denmark - as it has been particularly tiresome this morning. I am hoping that I will be able to revisit the man cave this weekend but will have to see.

As I am currently unable to get up into the man cave at present it has given me the opportunity to catch up on some reading and to support this I have managed to score some bargains courtesy of eBay. These are all in good, second hand condition just as I like them! 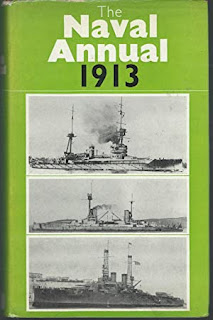 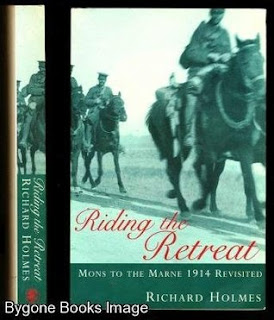 At long last I have a hardback version of the late Richard Holmes's 'history - come - travelogue' covering the the retreat from Mons to the Marne and introducing Thatch, the horse that ate Europe! 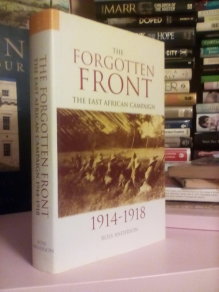 I was also pleased to pick up a copy of this by way of a support to my WW1 East African naval project(s).

(Note that the above pictures are taken from Google images and are not of the copies I have as the books are at home and I am some thirty odd miles away!)

All three of the above are useful in different ways. The Naval Annual of 1913 is full of useful stuff and includes charts of specifications and plans of the many of the major ships of the world's navies as well as chapters on various naval topics. It is an interesting snapshot of naval practice and theory on the eve of the Great War.

Riding the Retreat by the late Richard Holmes is one of my favourite books about a pivotal episode in the history of the British Army during the Great War. The book is a thoroughly entertaining travelogue as the author and his three companions ride the route of the BEF as they retreated from Mons to the Marne as well as a good overview of the campaign and the make up of the army of the period. I have fought a number of games based on the retreat using my block armies and also with the redoubtable Mr Fox. Attempting to emulate some of the more Bacchanalian exploits of Richard Holmes and his companions - they seemed to have eaten (and drank) very well on their travels in the various places they stopped or stayed - is not recommended for the faint hearted! Mr Fox and I did enjoy making the effort though, probably much to the detriment of the action we were trying to fight....

Finally, The Forgotten Front. This book covers the whole of the East African theatre so includes Von Lettow-Vorbecks campaign, Lake Tanganyika as well as the Kongsberg affair. A very welcome addition to the library and one that will be very useful.

I am pleased to have added these to my collection and I am sure to get much use out of them.

I bought a copy of the 1913 Annual when it was first republished, and it has proven to be a very useful resource over the years. I’m sure that you’ll enjoy dipping into it every so often.

It looks like being one of those really handy 'dip into' volumes and a great support for Conways. Janes will be up next methinks!

The East African Campaign is on my list to read up on, so this sounds like a useful book to have. Any other recommendations David for this theatre?

Three grest sounding books Dave. I feel your pain regarding your back....literally!

Put your feet up… read a book… and let the others do the hard work.

Oh and a nice glass of whiskey… for medicinal purposes of course.

In my collection covering the theatre I won the following:

There is a volume on of the Official History that goes up until the end of 1916, Battl for the Bundu by Charles Miller (this is very good but sadly my copy was one of those that went missing along with a number of other books a few years ago), The Phantom Flotilla by Shankland and I am pretty sure that Von Lettow-Vorbeck’s memoirs are available of his time in East Africa.

I am pretty sure there are others!

It has been incredibly frustrating for sure!

I have found the extra reading to be very handy! I don’t know about the whisky but I have been enjoying the occasional glass of a nice Chilean Malbec!